2 days in the Valley

Bringing Down the House

Devil in a Blue Dress

The Greatest Story Ever Told

Gunfight at the O.K. Corral

The Hitchhikers’ Guide to the Galaxy

Land of the Dead

The Life Aquatic With Steve Zissou

Show Me the Picture

The Tailor of Panama

To Catch a Thief

The Woman in Black

Mark, Mary & Some Other People

Keeping Up with the Kardashians: Complete Season 20 (E!)

I Know Who Killed Me

This January the spin-off to the popular comedy How I met Your Mother starring Josh Radnor and Neil Patrick Harris, debuted on Hulu. How I Met Your Father stars Hilary Duff as Sophie who’s telling the story of the love of her life to her son. The show while technically a spin-off, does not follow the same characters introduced to us in the original show. How I Met Your Father does take place in New York City in the same universe as the previous series, even featuring two of the characters living in the same apartment as Josh Radnor, Jason Segal, and Alyson Hannigan’s characters.

Despite negative reviews and receiving the label of another senseless reboot, How I Met Your Father has already been picked up for season two and will premiere again on Hulu. Multiple conceptualizations of a spin off were brought up to executives at CBS where the original series aired but ultimately was pushed back and revitalized into the Hulu original. Creators of How I Met Your Mother Carter Bays and Craig Thomas serve as executive producers for the show while co-showrunners of NBC drama This Is Us Isaac Aptaker and Elizabeth Berger created How I Met Your Father.

Academy award-winning actress Amanda Seyfried stars as infamous CEO Elizabeth Holmes in Hulu’s new original series following the incredible true story of the woman who scammed the world. After dropping out of Harvard, Elizabeth Holmes founded her medical company Theranos where she claimed to have invented a machine that could provide rapid blood test results with only a single drop of blood. The show follows Seyfried’s portrayal of Holmes and how she lied to investors, scientists, and companies around the world to achieve unprecedented success. Originally the role was to be played by SNL’s Kate McKinnon who eventually left the project leaving room for Seyfried to step into the role.

In addition to Seyfried, The Dropout will also star Naveen Andrews, William H. Macy, Dylan Minnette, and Stephen Fry in the main cast. Seyfried’s commitment and dedication to this complicated role shine through in the trailer and viewers are already wondering if Hulu is going to strike gold with this series, adding it to the likes of Hulu’s most successful series original The Handmaid’s Tale. The first three episodes will arrive on Hulu on March 3rd of this year with the rest of the episodes releasing weekly. This format has already been experimented with on other Hulu originals such as Pam and Tommy forcing viewers to wait for what’s next rather than being able to binge the show in one sitting.

If you thought the Kardashian hype was over, this may not be the read for you. 10 months after the final episode of “Keeping Up with the Kardashians” the family decided to announce a new reality show premiering on Hulu on April 14th 2022. As usual, the Kardashians have remained in the spotlight with the internet obsessing over Kim’s relatively new relationship with SNL star and modern heartthrob Pete Davidson. Kylie and rapper Travis Scott just welcomed a baby boy into their lives and Kourtney was recently engaged to Blink-182 drummer Travis Barker. There’s never been more Kardashian drama and Hulu is ready to capture it all for the eager audience’s prying eyes. The show will follow a similar formula to the original show but will emphasize the women’s busy careers and family lives-revealing their secrets on how they balance it all.

Matt Groening of The Simpson’s futuristic comedy Futurama is getting a revival and it’s coming to Hulu. Groening will be working with another Futurama veteran David X. Cohen so fans don’t have to worry about sacrificing the show’s authenticity and originality. In addition to the original creators hopping on board to produce the revival, original cast members Billy West, Katey Sagal, Tress MacNeille, Maurice LaMarche, Lauren Tom, Phil LaMarr, and David Herman are all attached with the exception of John DiMaggio who has not been confirmed to appear in the project. 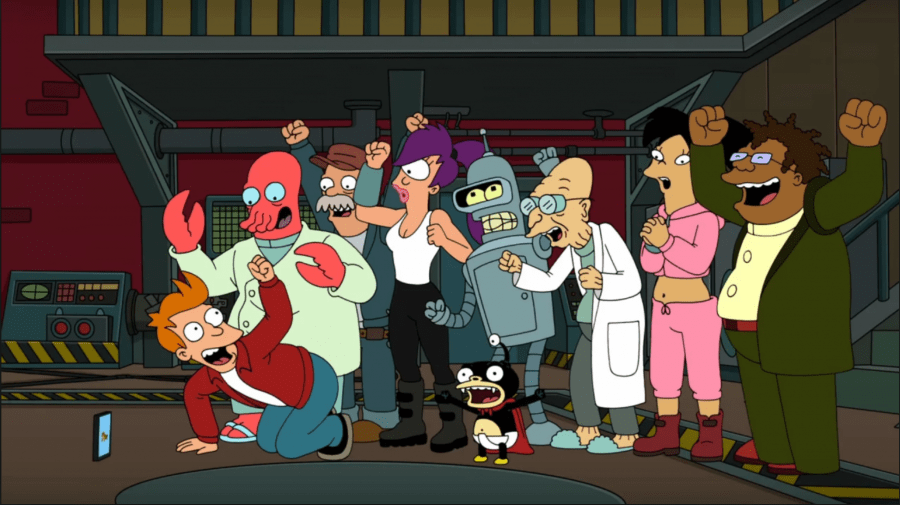 The original show follows Philip J. Fry (Billy West) who is cryogenically frozen and then woken up in the new millennium of the 31st century. Fry soon finds a job at an interplanetary delivery company alongside Leela (Katey Sagal)  and fan favorite, Bender the robot (John DiMaggio). It’s unclear if the series’ revival will feature a similar plot but considering most of the voice cast is returning the revival will most likely follow the same characters as they get themselves in and out of new, hilarious scenarios.