Emmrose Talks About Being A Young Woman in the Music Industry

Growing up in New York City, Emma T, or Emmrose as she’s musically known, understood the importance of compartmentalizing influences from the beautiful city she’s surrounded by and her own personal experiences. Now 18 and in college, Emma is continuing her musical legacy and diving into more prevalent topics with her recently released single “Brave New World” which derives its title from Aldous Huxley’s 1932 novel. Emma reveals that her music is entirely guided by her introspective and prolific feelings and how necessary it is for young women to explore their feelings.

Q. Emma, how did you come into music? Was it a thing you recognized early on? Share your story.

A. I’ve always been a very musical person, I hate it when people say that but it’s very true for me. The first song I ever wrote was when I was watching this movie trailer and they had this song and that song was stuck in my head forever so I just made my own version of it. Same melody, just different lyrics, I was 4. I remember I was in a gymnastics class and they made me sing it in front of everybody and one kid was like “you didn’t write that, that’s a melody I know!” So after that, I swore that everything I wrote would be original. I had a lot of boy problems in middle school and I really struggled with my identity and friends and dealing with life in general.

The thing I turned to was music. If I was having a panic attack I would just write in my notebook all the things I was feeling. I also took piano lessons as a kid. I hated it. I’m not a classical pianist. I think it’s beautiful. I love to listen to it but to play it’s a nightmare. So from there, I wrote my own music since I was in 7th grade.

Q. When did you realize that you wanted to do music full time?

A. My piano instructor at the time actually had a hit song. She also did pop music on the side. The two of us bonded over that. She had this song that got a million spins on Spotify and that was like big news. I thought to myself “damn maybe I could do the same thing!” One of my songs now has a million spins which is really cool. I played [my piano instructor] some of my songs and she was like wow this is actually really good. As a kid I was like really I don’t know about that. I was only 12. If you hear my old songs it’s not the most profound lyrical work but honestly, they’re pretty good melodies still. One of my songs that I have released is called “Dangerous Eyes” which I wrote when I was 12 or 13. Do I relate to it as much? No, but it’s like a time capsule.

Q. Now that you’re 18 and in college how are you balancing music and school and life?

A. I usually work on Fridays because I have Friday off from school. That’s usually my recording day or my publicity day. Now I’ve booked so many gigs I’m so excited. I’m playing at the Bowery Electric pretty soon. I’m playing Rockwood in a few weeks. I’ve been playing live for a while since I was like 14. I started out really young because it felt like it was the only thing I could do. Back in the 2010s streaming wasn’t really as popular; you had to play live. So my mom went on Craigslist, found a guitarist, found a bassist and we just played smaller clubs around the city. It sucks though when it’s midterm week at school and I have a new song coming out and I have to do all these things for it. I want to have good grades in school but homework has just been such a drag. I feel like my social life has been a roller coaster also but my music has been ok, fortunately.

Q. Who are some of your most prolific musical influences?

A. I really like Florence + The Machine. I think she’s amazing. Recently, I’m really into Soccer Mommy. She does indie rock. For rock I really like Radiohead. I’m such a Radiohead nerd. Really starting out I really liked Lorde and how personal her lyrics were. I like Clairo and oh my god Taylor Swift! I love Taylor Swift.

Q. I love that you take inspiration from a lot of female artists. What’s it like to be a young woman in the industry? What challenges have you faced?

A. Definitely the whole thing of being sexualized and also being seen as a little girl really annoyed me. I went to LA to talk with a music company and I was basically treated like a child the whole time. My opinion wasn’t asked for it was really my manager talking the whole time and it just really made me like “oh this is fine but I have things to say!” As a kid, I went through puberty very early. So that was very interesting of being 14 and having a more adult body. A lot of men were really weird about that, especially on social media. You would not believe the DMs I get. People ask me things like “how old are you, gorgeous, do you have a boyfriend, do you wanna get married?” It’s like no I’m 18. When I was 15 one of my songs got thousands of spins and then I got really weird messages. It’s really uncomfortable. I’m an adult now so at least there’s not the child aspect of it but it’s still gross and I don’t like it.

Q. Let’s talk about your new song “Brave New World”. What were the messages and themes you wanted to convey? How was the production process?

A. It was my first more political song. It’s based on the book “Brave New World” by Aldous Huxley. Do I recommend reading the book? Honestly no I don’t really like it at all. It was written in the 1930s and it was one of the first dystopian books. A lot of the views towards women and native people are very backward. But it was the first science fiction, dystopian book even though it’s very misogynistic. It created a totalitarian state. I think it’s very opportune to release it now. It actually got a lot of traction in Russia which I think is very interesting. You could say that they’re living in a sort of dystopia especially because I know a lot of people who live in Russia and they’re disgusted with the government and the things that are going on. I didn’t want people to get it twisted like I’m not against the government. I’m very liberal as a human being so people have their own opinions about that but whatever. I feel like another influence [for the song] is 1984 the book.

The song was my own little dystopian world kind of vibe. I work with a producer. We come up with all the parts. I come up with the lyrics and the melody and this was actually one of the first songs I ever wrote on the guitar. I didn’t know how to play it at the time but I just practiced every day. But you can only play Wonderwall so many times [laughs]. I was inspired by Radiohead’s “Fade Out”. I wanted a minor-key guitar song. Then I kind of went crazy from there. It’s a very cinematic song. People I’ve worked with have even compared it to a movie trailer song!

Q. You were recently on the set of your first-ever music video. What was that like?

A. Yeah! It was great! I watched a tape of one of the first songs today and it looked really cool. There were like 20 cameras there. It was wild. It was really interesting having a crew there. Was it intimidating? Yes. Was it mostly men? Yes. I was a little intimidated not because there were men there but because there wasn’t another woman on set. I don’t wanna bring up gender repeatedly but there was a problem with my mic and I was kind of hesitant to say to one of the sound guys “hey can you fix this?” They also didn’t even say hi to me except for the director who’s one of my favorite people ever. But the crew didn’t even say “hi, how are you?” It was definitely an interesting environment.

Q. What’s next for you music-wise? What are your goals for the future?

A. Oh my god, the future is scary. I think wow what if music doesn’t work out what’s your plan b and I say “oh god I don’t know!” I don’t wanna be famous in particular. Honestly, I’d love to write music for other people. I do not want to be Ariana Grande or Billie Eilish. I don’t want 15 million followers on Instagram. My anxiety can’t handle it. I’m not a perfect person, I don’t think anybody is. I wanna be able to go to the grocery store and not have to worry about things like my sunburn that I have right now for example. I’m already self-conscious as it is. Fame is not the goal but I would like to have a sustaining career. It sucks to be an artist and basically just be in the red spending all this money with little to no result in the end but now at least things are picking up. I’m going to Paris for a business trip in a few weeks so that’s really exciting! I signed a deal with a music company in Paris and they work directly with Spotify. I’ve also been in contact with some people from Facebook for more promotional stuff. I don’t love Facebook as a company but that’s how you get revenue and market your stuff. I just want to have a career but not be so big that I can’t have a life [laughs].

You can stream “Brave New World” on Spotify, Apple Music, and other platforms. You can find Emma’s music here: https://linktr.ee/emmrosemusic 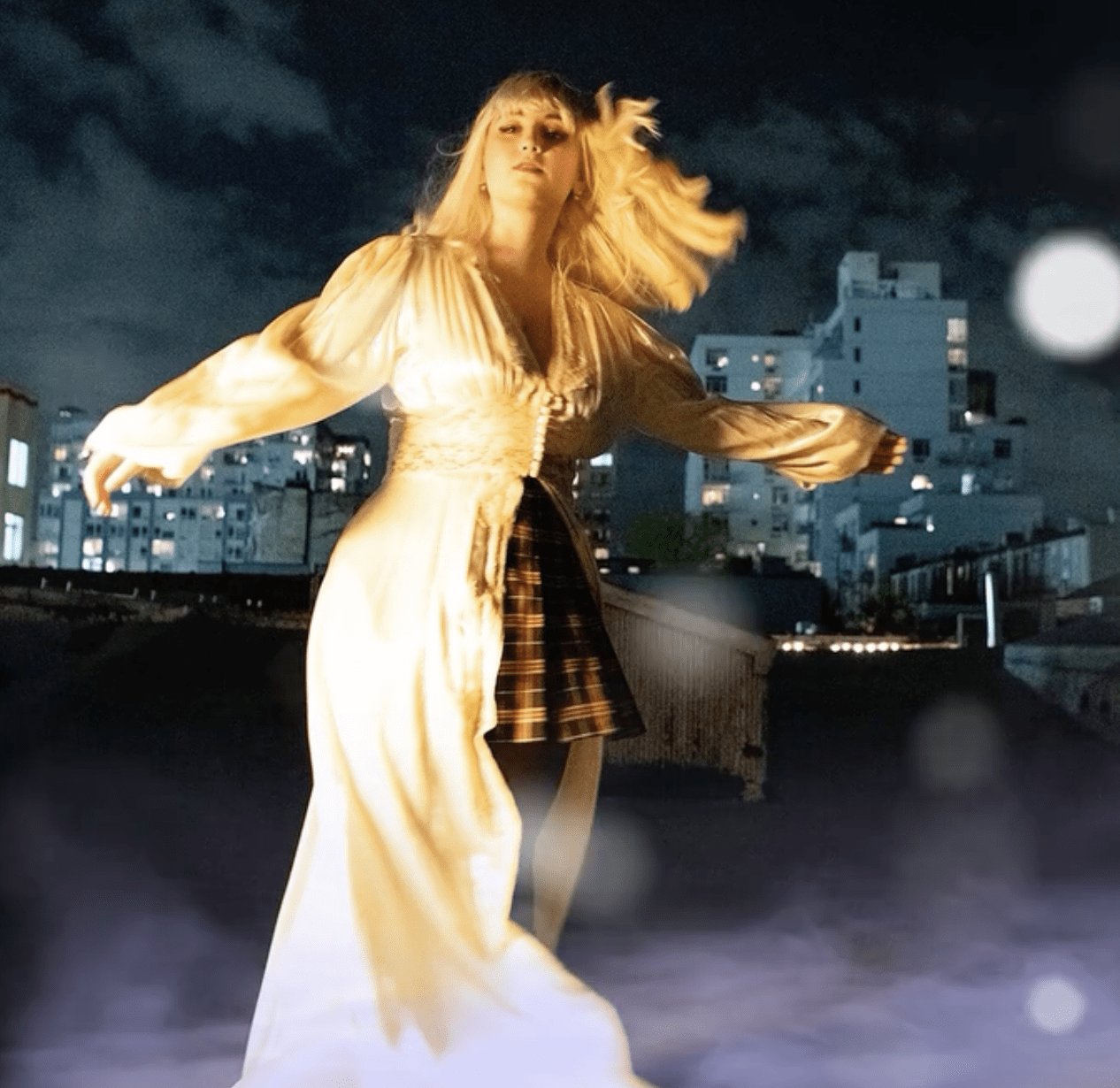