When asked to join the wizarding world of Fantastic Beasts: The Secrets of Dumbledore, Jude Law said there was no hesitation to join the team in the role of the wizard destined to be Headmaster at the famed Hogwarts.

Law, the accomplished British stage and screen actor, director, producer, and screenwriter, is best known for his roles in the movies The Talented Mr. Ripley, Road to Perdition, Closer, Hugo, and a younger Albus Dumbledore in Fantastic Beasts: The Crimes of Grindelwald is 2018, the second of the three related films.

The extensive CGI to create the magic and truly fantastic beasts, the sets and costumes, sweeping music, and top-notch acting from the true ensemble cast makes Fantastic Beasts: The Secrets of Dumbledore a true triumph!

If you love the Harry Potter or Fantastic Beasts stories and movies, or even if you are a newcomer who loves fantasy and adventure this is required film viewing.

The winner of a British Academy Film Award, as well as nominations for two Oscars and four Golden Globes, he is also known for playing Dr. Watson in Sherlock Holmes and Yon-Rogg in Captain Marvel.

Law has also had an accomplished career on stage, performing in several West End and Broadway productions, in which he earned Tony Award nominations for his roles in Les Parents Terribles in 1994 and Hamlet in 2010. 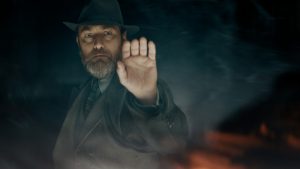 Fantastic Beasts: The Secrets of Dumbledore is a magical adventure that sends a team of unlikely heroes, led by Newt Scamander (Eddie Redmayne), on a mission that could spell their only chance to save both the wizarding and non-magical worlds. This film marks the third installment of this epic fantasy/adventure.

Each has a role to play in this covert operation devised by the ultimate wizarding mastermind: Professor Albus Dumbledore (Jude Law). Dumbledore has been one of the most revered figures in the Wizarding World canon since he was first introduced some 20-plus years ago. However, the beloved wizard of the Harry Potter books and movies has an intriguing history that is unveiled in the third film in the Fantastic Beasts series.

David Yates, the new film’s director, calls Law “a joy to work with. He was passionate about exploring every aspect of Dumbledore: the funny, beguiling side we know well, and the more vulnerable one that we’re less familiar with.”

Read on for Judge Law’s love for the magical stories, the camaraderie he felt with his co-stars, and why we must see Fantastic Beasts 3.

Albus Dumbledore has been with us for 20 years, from the start of the wizarding world.  In this third film, how has he changed?  And which of his qualities do you think are consistent with the Albus that we all know and love?

Jude Law:  It’s not a process of change, it’s more a process of regression I suppose.  And one of the joys that David really allowed me to investigate was rather than feeling the weight of the brilliant performances of Michael Gambon and Richard Harris, was to really go back and understand that he’s not the fully formed Dumbledore of the Harry Potter books and films.

Dumbledore is a man still finding his way, he’s still confronting and resolving his demons.  And that’s what I mean by regression I suppose. In this film in particular he’s facing the past; he’s facing himself and his own guilt. But if there were a quality that links him, I would say it’s his mischievousness, his humor, and his belief in people.  He sees the positive. You think how Dumbledore believed in Draco, he believed even in Tom Riddle.  He sees the good or the potential good, and I think that’s something that he’s always had.

What were the best parts of making the new movie?

Jude Law: What I enjoyed the most was the opportunity to unpeel more of Dumbledore’s past. There were hints of it in the last film, but here we are able to delve into his connection with Gellert Grindelwald as a young man and the point at which it started to break. Albus had once shared with Grindelwald quite extreme views about Muggles, which he worked out himself as being wrong and backed away. But he lives with that dark secret and the fallout from their relationship. 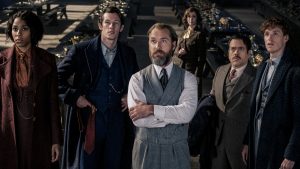 What appealed to you about diving into this character’s history?

Jude Law:  It was a kind of a no-brainer.  “Would you like to play Albus Dumbledore?”  “Yes, I would!” I felt like I’d been in preparation subconsciously from the minute I started reading the books to my children. Gosh, there’s just so much in the character to mine and to investigate as an actor, and that’s before you even get into this extraordinary world of magic.  That’s just him as a human.  But the magic’s really fun, too.

Please tell me more about this.

Jude Law: I remember Eddie telling me that on the second film, the first film for me, where he talked about if there’s a situation or a problem with a scene, remember you’ve got magic at your disposal.  The scene in Berlin when I had to basically pass on information to the team, went from being a scene where I was basically passing over maps to a scene with a magic hat and all sorts of things flying out.  Again, that was the excuse of, well, yeah, it’s magic, so I can do that.

Talk about the election of a new president of the International Confederation of Wizards, which is causing great turmoil.

Jude Law: Grindelwald has amassed a greater following and is, therefore, a greater threat. Dumbledore must hatch a plan that will stop Gellert Grindelwald from realizing his dream of establishing a world in which pureblood wizards dominate Muggles. On the one hand, Albus is restricted in what he can do magically to stop Gellert’s propulsive ascent, but that spurs his relationship with the people he must rely on and, to a degree, manipulate to help his cause.

But what I like to think about is that Dumbledore is also someone who encourages people to excel in their own potential and abilities—to discover in themselves the moral grounding and conviction that what they’re doing is right and to find the courage that it takes to confront the threat of Grindelwald. They’re not coming into this because it’s their job; they are doing it because they care and they’re invested. What’s so interesting to me is, that despite being chained to secrets of his past in a literal way, he still innately relishes life and the possibility of hope.

So, because he finds his skills with magic so natural, he is playful with it at times, with an almost impish quality, and I tried to embrace that. Even in the most extreme circumstance or dangerous situations, he is able to bring in an element of fun because, as a teacher, I think he knows that’s probably when people can revel in a situation and operate at their best. 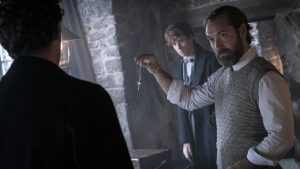 Jude Law: David Yates has a very collaborative and inclusive approach, in front of and behind the camera. And he strings it all together with such a sense of clarity that it’s sometimes easy to forget that he has 100 different balls in the air that he’s juggling whilst he is giving you a perfect note on one particular line or word. You can embrace and enjoy the spectacle, but I think I’d be right in saying that what David loves most are the human stories within it and that’s what he’s terribly good at unearthing and empowering us to portray.

Which of the fantastic beasts would you like to bring from the movie into the real world?

Jude Law:  The Demiguise. He’s kind of sweet in a specific kind of way. I keep thinking about how sweet they are.