It is a perfect opportunity to spend an evening with an iconic First Lady, and Penelope Reed certainly delivers in her role in Eleanor.

Written by Mark St. Germain, the Act II Playhouse in Ambler is hosting the regional premiere of Eleanor through November 20.

More than a retelling of Eleanor’s life as a diplomat, writer, and champion of social justice, St. Germain boldly peels back the layers of the private Mrs. R. and reveals the fascinating truths behind the woman who forever redefined the office of the First Lady.

In this titular one-woman role, portraying many characters, is theater treasure Penelope Reed, who brings enormous stage presence, depth, humor, and insight into the life of Eleanor Roosevelt. It is an insightful evening of theater, combined with history, legacy, and much more.

“Eleanor celebrates the legacy of an incredible First Lady, patriot, and public servant,” says the show’s director Kate Brennan. “I hope it will inspire us to be just as extraordinary as Mrs. Roosevelt in these most extraordinary times.”

“Eleanor had a moral compass,” said St. Germain. “While Franklin was a politician in every sense, she looked at those around her as human beings with dignity, not votes. She said what she felt and stood up to injustice in any form. Eleanor was the heart of the White House and our country.”

Another aspect of the First Lady’s life that resonates with Reed is caring for those who are less fortunate than we are.

For many years Reed has worked on literacy programs, especially involving young people in the inner city. “I am taken with all of these phenomenal minds and how we can cultivate them if we give them a chance to shine”

Reed, who has tackled many complicated roles before including Emily Dickinson in The Belle of Amherst, is an award-winning theater actress. In fact, she won a Barrymore Lifetime Achievement Award in 2017.

She has close personal ties to Rose Valley’s Hedgerow Theatre, (in Media, PA.), which will celebrate its 100th anniversary in 2023.

Penelope grew up at Hedgerow. Later, she worked at the Milwaukee Repertory Company. She was a lead member of the McCarter Theatre in New Jersey and ran the drama department at the Lawrenceville School. Then in the wake of a 1985 fire that reduced Hedgerow to a shell, she moved back to help raise it from the ashes. The theater reopened in 1990.

In 2017, Reed, who had run the Hedgerow company since 1998, passed the reins to her son, Jared Reed, who took the theater to new professional heights and kept the theater alive through digital video and sound offerings performed by the Hedgerow residents. Currently, her son is running programming for the Media Arts Council Center.

Reed had taken over from her own mother, Janet Kelsey, who died in 2018, but had served for many years as an actress, costume designer, business manager, and board member.

Read on for more about Penelope Reed’s experience taking a deep dive into the life of Eleanor Roosevelt, how the play resonated with her own life, and her joy in working with young people, especially in the inner city.

Penelope, why did you want to delve into this extraordinary play about an amazing subject?

Penelope Reed: I loved the play because it goes way into all her feelings and other aspects of her life. So, it isn’t as much ‘ra ra’ Franklin. It’s a wonderful piece with a slightly different take by the writer and truly includes everything. She and President Roosevelt were so different and she rose above the challenges they both brought to each other.

The script will inform you. When the play opens, Eleanor is dead at Rock Creek Park Cemetery, where her spirit is and she often came, although she was buried at Hyde Park with her late husband, FDR. Early on she explains that Eleanor met with betrayal from Franklin with Lucy Mercer, certainly a devastating blow. Yet, I don’t think they wouldn’t have been as great if she hadn’t demanded that Franklin give her freedom to live her life the way that she choose to. This allowed her to travel extensively and using her compassion and concern for people, to head up many committees and programs that changed our society.

So, how does the play see the partnership between Eleanor and FDR?

It is about deep mutual respect for each other’s minds and they were able to create phenomenal things because of each other. She reflects on her life. You will love the layers of this play. She was a great First Lady and she was his continuing voice after FDR’s death. Her activism woke him up to understanding many aspects of changing society, including the suffragette movement. Franklin encouraged his wife to get involved in the League of Women Voters because it showed her that women voting would help all the women’s and human rights issues that she so passionately believed in.

How did this play personally resonate with you?

I have always had great admiration for her. Once I was asked to audition, I started to go deep into her multi-layered life. My director Kate and I meet every day before rehearsal. We read from Eleanor in her own words.

My understudy, April Woodhill, brings in these books and we have these volumes we read from to inspire the day ahead.

You say this is more than a one-woman show. Please talk about this aspect of the production.

Yes, I play Eleanor, but I also I play 14 other people as she shares stories about them. She connects with the audience and her stories deeply resonate with us. We discover Eleanor finding she has to deal with the baggage in her life, as well all must. But it is also about all of the incredible designers and theater professionals who work under the direction of Kate Brennan who leads the play and Tony Braithwaite who leads this stellar company.

I believe that it is a celebration of the creative arts. We are dealing with her mind. Anyone who wants to learn about Eleanor and Franklin will learn a lot from this piece. The entire creative team is honoring Eleanor. I am so in sync with parts of Eleanor. I love whenever you take on a play and it becomes so much more evolved and it takes you with it. This has been a phenomenal experience with Act II; the entire company is led by Artistic Director Tony Braithwaite.

Eleanor was quite the writer with her daily My Day newspaper column.

Yes, in the show I read from two of her letters over the pretend radio, they give a wonderful tapestry of what’s going on. The playwright did enormous research for this play. There are many details to convey, starting with FDR’s mother, Sarah, taking control of their lives. Other details are that her bedroom in Hyde Park was so simple it was almost like a nun lived there; with just a bed and a desk.

One aspect of her life at her Val-Kill Cottage is eye-opening. It is so beautiful, like a Monet painting, where you walk along this gravel road over a bridge. The cook would make dinner and Eleanor would tell her there would be three for dinner, but the cook was wise to her and made food for many more and 12 people would show up. Eleanor just loved people and her charm was a magnet for them. Eleanor Roosevelt is quoted as saying, “Val-Kill is where I used to find myself and grow.  At Val-Kill I emerged as an individual.” 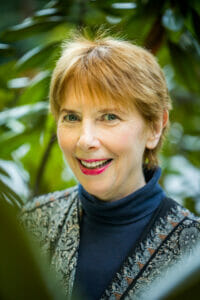 Why do you want my readers to see Eleanor?

I think her take on life right now is so timely. This is a person who as FDR’s political advisor Louis Howe put it, “can put herself in anybody’s shoes.” She was such an advocate for democracy and for both political parties working together. She was such a major advocate for not forgetting the little guy. This raises awareness for loving one another and having hope.

What we need rather than judging and pointing fingers is to always look at people as individuals. She was a great listener. When the audience comes together to see this production, they will feel really good about being a human being and the potential for change for good.

There is a genuine sense of humor and love, and because of her uncle President Teddy Roosevelt, she was brought up in that world to navigate all sides, especially in her family. What do you do in families that have different political takes — the key is to listen and use humor. I believe this is a terrific lesson for how we can navigate this period of time and work hard toward bringing people together.

For Tickets check out:

More about the Act II Playhouse:

The Act II Playhouse is committed to creating and programming world-class theatre in a venue whose intimacy draws audiences and actors into dynamic interaction. Act II produces new, classic, and contemporary plays and musicals that reflect the highest artistic standards.