Review of Netflix’s The School for Good and Evil

Netflix’s latest fantasy thriller, The School for Good and Evil had a lot of expectations to live up to. Fans of the original book series by Soman Chainani were skeptical as most who have a previous attachment to a franchise are, hoping that the film version would accurately capture the magic instilled in the pages of this beloved series. Meanwhile, fantasy lovers and film critics alike remained inquisitive of just how successful the film would be with its acclaimed source material attached to it as well as a star-studded cast including Charlize Theron, Kerry Washington, Laurence Fishburne, and others. The film also features gen-z favorites as its leading ladies, including Sophia Anne Caruso (Beetlejuice The Musical) and Sofia Wylie (High School Musical: The Musical: The Series).

The film secured the number 1 slot in Netflix’s top 10 most popular films/shows until it was overtaken by the true crime series The Watcher. Rotten Tomatoes critics gave the film a failing grade at 35% while general audiences were more generous with their rating at 70%. Letterboxd reviews average out at 2.9, stars-about a 6/10 stars wise. While the film delivers a fantastical adventure alongside dedicated performances and fascinatingly beautiful costumes, a mixture of a pandering modern soundtrack, lazy special effects, and an oversaturated core theme that’s been done again and again, attributes to the film’s fast-paced, convoluted and ultimately loose-threaded nature.

The School for Good and Evil is about as literal as its title gets as two childhood best friends Sophie (Sophia Anne Caruso) and Agatha (Sofia Wylie) are transported to another world in which princes, witches, and magic are all regular occurrences. While Sophie with quintessential blonde locks, obsession with princesses, and a handmade, colorful, pastel patch gown wishes to attend the school for good, she is instead dropped at the school for evil while Agatha with dark hair, more traditionally masucline attire, and witchcraft ties is dropped at the school for good. Led by the school’s deans played by Kerry Washington and Charlize Theron, the girls learn to peer inside themselves and look past the archetypes they’ve played into their entire lives, discovering that good and evil are not measured by one’s appearances but instead what lies beneath. 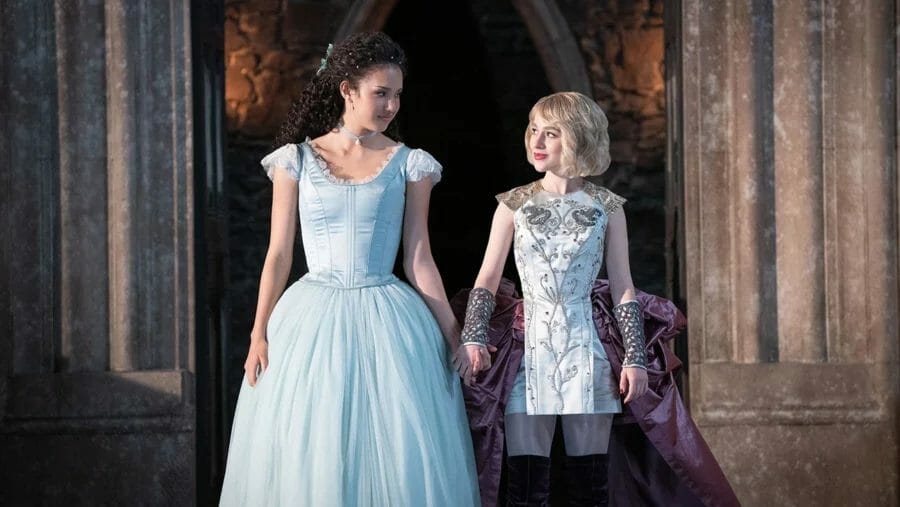 The film is roughly two and a half hours long and by the end, still feels like the audience has missed a quarter of the overall story. Perhaps this is because the very end of the film is already setting up the next film with a semi-cliffhanger ending. However, many character arcs feel resolved too quickly or completely forgotten about. While the central arc of Sophie and Agatha’s friendship is given ample time to develop and involves some pinnacle moments of the film in order to strengthen their dynamics, the other princesses and villains feel left behind and only there to propel the conflict between our two protagonists. Perhaps the only other student at the school for good and evil who is allotted generous screen time is Tedros the song of King Arthur who’s featured in some of the worst choreographed fight scenes ever placed on a screen with plenty of choppy editing and cringeworthy special effects to coincide.

Aside from Tedros, and the two deans, other characters are completely sidelined in order to showcase a classic narrative of two polar opposite friends drifting apart. As for worldbuilding, audiences don’t receive too much information about where exactly The School for Good and Evil is. We’re treated to the fact that many of the students at this school are the children of esteemed fairytale characters while Sophia and Agatha are “readers” who come from the non-fairytale realm. Fans of the novel have complained that the film should’ve been made into a TV show in order to flesh out more interesting and crucial aspects of the series. This definitely would have benefited the film as the climax of the film features a conflict that is snuffed out in seconds in a moment that definitely thinks it’s more subversive than it actually is.

The rules of the world feel arbitrary which might be chalked up to a twist towards the climax. However, this twist is barely given any time to develop or have an overall impact on the story before we return to the central conflict between Sophie and Agatha. Many fans of the books have also complained about how Sophie and Agatha’s relationship and overall personalities were completely misguided in how they were adapted. The negative attention has mainly shifted to Sophie, who fans claim, was not portrayed as accurately as she could have been. The modernized elements of the film have also received criticism most notably the soundtrack. It seems these days that every Netflix film directed at gen-z audiences thinks they can play “Brutal” by Olivia Rodrigo and that’s enough to solidify artistic relatability. The film also features “you should see me in a crown” by Billie Eilish played during a scene that some view as empowering and others see as embarrassingly pandering.

Of course, no book adaptation is perfect and The School for Good and Evil is far from the first film to prove that an A-list cast isn’t an indicator of the quality of the film’s final product. As it stands, The School for Good and Evil is a fun, whimsical, yet familiar journey. It certainly isn’t as magical or thought-provoking as it wishes it was but those in need of a quick fantasy fix will be satisfied with the majority of the film.