I’ll be the first to admit that not everything I’ve introduced my family to has been a success, especially in regard to my vegan meal substitutes (“This tastes just like real lasagna!”). However, I have a knack for bringing great TV shows to the table that are a hit with my whole family – the longest-running success of these being “Bob’s Burgers.” I remember first stumbling upon the show on Hulu and insisting my whole family watch it with me. It’s been ten years strong of us either keeping up with it religiously, or letting a few seasons go by so we can have an enjoyable bingefest on a long weekend. There is something simple about the show: a family in a run-down beach town own a burger restaurant. The father, Bob, is the owner and chef of the restaurant, and he and his wife Linda try their best to raise their three children Tina, Gene and Louise with a sea of kooky characters and zany situations tossed into the mix. 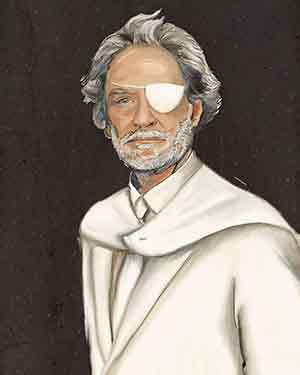 Each of the family members has their own little quirks, be it Tina, the teenage daughter who is boy crazy, or Linda, the matriarch with a talent for turning everything into a song, but it’s these little details that really bring the characters to life. And no character escapes this level of detail and dedication; one could even argue the side characters are some of the most interesting characters ever brought to life. If you know anything about me, you know that my resounding crush on Kevin Kline leads me to most projects because, as the kids say, “I have to support the boy”. It’s how my mom managed to drag me to see the Beauty and the Beast remake (as an ardent lover of the cartoon, I was hesitant, but Kevin Kline as an artist Maurice was too much for my little lovestruck heart to overlook.

And to my surprise, I actually loved the film.) While Kevin Kline isn’t what initially drew me to Bob’s Burgers, it certainly added a level of interest I wouldn’t have had otherwise. And his character, Calvin Fishoeder, is the landlord for the town and the owner of the amusement park, Wonder Wharf. He and his brother Felix, (voiced by the insanely talented Zach Galifianakis) can serve as both the antagonist or the protagonist given the episode or movie, and I think that complicated characters like this deserve a little bit of the spotlight.

1.) Ambergis
While this episode is mostly about the kids fighting carnies, I always tune in for the riveting B-plot: Felix having to renovate Bob & Linda’s bathroom. I know what you’re thinking, and you want to scroll on to number four, but hear me out: this episode gives incredible depth to the sibling dynamic between Felix and Calvin. Despite Calvin being the landlord and otherwise disinterested in the well-being of his tenants, he does seem to constantly give his younger brother odd jobs around town to help him feel included. (This is especially important later, when we get to Felix-centric episodes).

This level of empathy towards his brother is even more important when later on in this episode, we find out that Felix gouged out his brother’s eye – and not only that, his mom and Calvin apparently sang about it in a song they used to comfort Felix when he was sad. Calvin may not always be the most attentive landlord, but this level of human compassion is definitely something the rest of his family did not possess and is an important thing to note about his character. Also for those wondering the bathroom looks like it belongs in a nightclub in New York after Felix is done with it, which is a choice.

2.) Wharf Horse/World Wharf II: The Wharfening:
These two episodes are the season four finale and what a treat for me, a Fishoeder fangirl. The premise is Felix wants Calvin to sell Wonder Wharf so that Felix can impress his girlfriend, Calvin says no, so Felix ties him and Bob under the pier so the high tide will kill them and they can build the condos (Bob’s good-naturedness is often what puts him in these situations, especially with the Fishoeders who are often amoral).

These two episodes of Bob’s Burgers are two of my all-time favorites and have so many golden moments of dialogue (“Bob, there is no take your landlord to lunch day, is there?”) but what really adds something special here is the brother dynamic. Even as Felix is tying them underneath the pier, Calvin takes every opportunity to mock his brother, his plan, and the idea that he’s going to go through with murdering them. This leads to many explosive reactions from Felix where his inferior complex towards his brother is definitely on full blast: ie “Then I’ll be Mr. Fisheoder, and you’ll be Calvin….Crabs! The stupidest dead person ever!” This dynamic put on display is one of a very insecure younger brother, who was clearly the mother’s favorite, and a rather unbothered and condescending Calvin, who was clearly his father’s favorite as he inherited the Wharf (though that is to clarify, Calvin and his father had an odd dynamic to say the least; when it is revealed his father left the Wharf to Calvin in his will, Calvin was unsure if the whole thing was a joke).

When it’s all said and done, Felix can’t go through with it, and attempts to save his brother but his neurosis prevent him from moving quickly enough – luckily Bob’s family saves the day. Calvin, upon his rescue, decides not to send Felix to jail as “he would hate it there” and instead settles for the one free punch he gets to give Felix as “those are the rules”. This episode leaves more questions than answers, but definitely sets up the bizarre Fishoeder family dynamic that, while baffling, fully explains their dysfunction with each other. I wonder how much of Grey Gardens was sampled for this…

3.) Copa-Bob-bana:
Another classic episode centers around the Fishoeders (rather Calvin) buying a nightclub in town and turning it into a jazz club called “Jazz-aret”, an apparent dream come true for Felix. While Felix has tried to start nighclubs in the past, these attempts were always to impress a girl that he liked in town named Fanny, though there is something to be said about Felix’s gravitation towards condos, nightclubs and new money, while Calvin seems content with the old wharf, his tenants and their local businesses, and feel of the small, seaside town.

Anyway, it is later revealed that Calvin only rented the club as he knew Felix would lose interest after a day and they’d eventually just tear down the building. The reason they have it open for one night is mostly so Felix can live out his fleeting fantasy, but also so Calvin can sing a song (initially he is going to sing a duet solo, but realizes singing with another person can be fun after Linda sings with him). While that realization is…kind of tragic to the viewer, it’s even sadder once Felix realizes his brother is only humoring him, and sabotages the duet by locking Linda in a broom closet. It cuts to Calvin on stage trying to buy time, but eventually accepting his duet partner abandoned him.

Felix, meanwhile, tries to have sewage explode all over the guests to stick it to Calvin, but is fortunately thwarted by Bob. It ends with Calvin and Felix wrestling on stage, with Felix claiming Calvin never believed in Jazz-aret, and Calvin asserting Felix has never finished anything in his “Jazza-life”. While this episode doesn’t have the heightened adventure of the Wharf epsiodes previously mentioned, it does add a little more depth to the relationship between the siblings. Sure, Felix couldn’t leave his brother tied up under a pier, but could mostly anyone? In this episode, we see that Felix values his brother’s opinion of him, even just a little bit, and knowing his brother thinks he’s a flake is enough to get him to spiral.

In that same regard, despite how dismissive Calvin is of Felix, this episode really illustrates the fact that Calvin is a very lonely person (he didn’t realize a duet could be fun? Does anyone else think that’s really sad?) and the fact that he went out of his way to rent a nightclub just to humor his brother (and indulge in a little singin’ himself) is not an attempt to connect, but simply placate a very lost soul Calvin really doesn’t have much connection to besides older brother who looks out for his sibling. The whole episode makes me cackle with laughter, but also leaves me with this resounding sadness as two very lonely people can hardly even show up for each other.

What a fun note to end on.
Am I dissecting a cartoon too much and thinking about these things in a way I doubt the writers or actors ever think about? Maybe, but that’s fandom brain rot for you, especially in these ‘work from home’ times. In an age where bedtime means nothing and TV shows occupy a lot of free space, the creative mind cannot help but to invest and dissect and create the internet phenomena that is “brain rot”, or a television show and characters consuming so much of the brain space that it becomes all-consuming. In this little series I plan on adding, I hope it acts as some catharsis for my brain and gives me some space for new things to talk about.
In the meantime, what are some of your favorite Fishoeder episodes? What are some other characters in Bob’s Burgers that deserve attention? Let me know.