Lorenzo Pugliese says that “a crazy number of people” told him he had to audition for the leading role in The Spongebob Musical…and so he did.

And the rest, as they say on the hit Nickelodeon animated TV series is Bikini Bottom history. It quickly became a cult favorite and has charmed viewers of several generations with its 262 episodes in 12 seasons.

Now Lorenzo is starring in the show at the Kimmel Center’s Forrest Theater in Philadelphia through Sunday, December 15. The show is about Spongebob Squarepants, an incurably optimistic and earnest sea sponge and his undersea pals.

The colorful, imaginative and memorable show involves Spongebob and all of Bikini Bottom facing catastrophe—until a most unexpected hero rises to take center stage. The show is a one-of-a-kind musical event, exploding with energy and featuring an original score from a legendary roster of Grammy-Award-winning songwriters.

The message is a powerful one: when told by his boss Mr. Krabs that he will never become a manager because he doesn’t have what it takes, Sponge Bob realizes he is not a loser and literally finds the strength to save the day.

“When the going gets tough,” we are told, “this sponge gets going.”

It is also a unique way to see Spongebob, Patrick, Squidward, Mr. Krabs, Pearl, Sandy, Mrs. Puff, and the others in Bikini Bottom literally come to life.

Just a short time after graduating from the University of the Arts, Lorenzo is incredibly grateful for this touring debut. His previous credits include Two Gentlemen of Verona (Ensemble), Damn Yankees (Postmaster/Ensemble), and Footloose, (Ren McCormack).

Lorenzo is pinching himself that it is his job to pretend he is Spongebob.

“Spongebob and his quirky and lovable friends’ spring from television to the Forrest Theatre stage in a Broadway blockbuster event featuring original music from superstars transcending genre and audience,” said Anne Ewers, President, and CEO for the Kimmel Center for the Performing Arts.

“Appealing to any age,” she said, “alongside its message of inclusivity, this show is the perfect choice to kick-start the holiday season on our Kimmel Center Cultural Campus.” 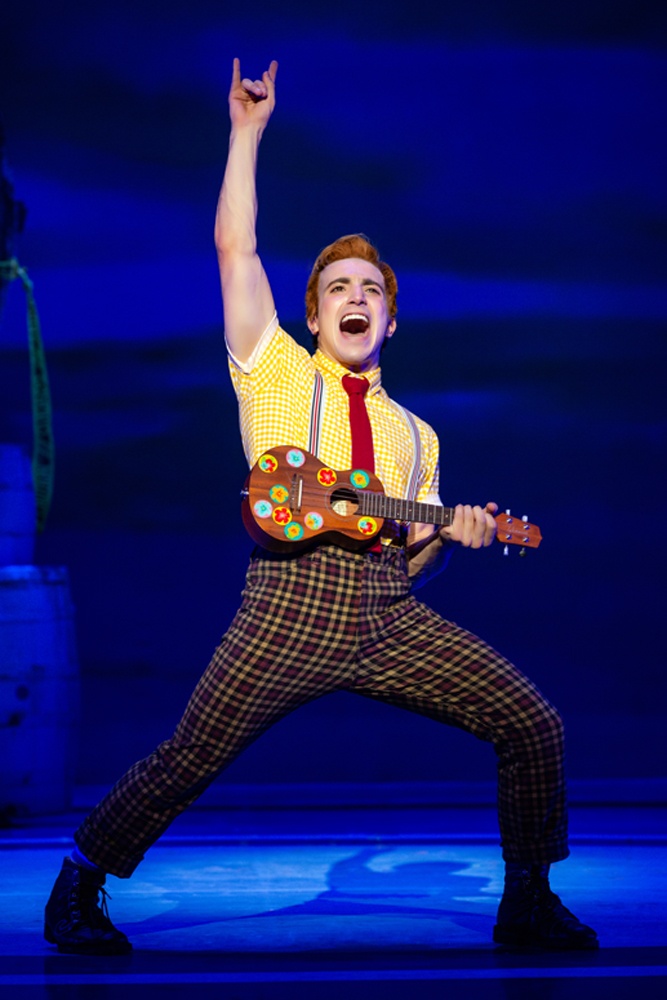 [Lorenzo Pugliese stars as Spongebob Squarepants in The Spongebob Musical]

When did you get bit by the acting bug?

My first show as the summer before 7th grade. I was more of an athlete at the time but my dad was forcing me to take piano lessons. My piano teacher recruited me for High School Musical. I auditioned and got the leading role of Troy. It was scary but as soon as I got on stage for the first time, and in front of an audience for the first time, it was so special I just knew that it was going to be a big part of my life.

When did you know you could sing and dance?

That first show was the first time I ever did anything like it. After that, I did a lot of community theater in Scranton and that’s where the idea of my doing this as a profession started to blossom.

Has your family been supportive of your career?

My family has always been super supportive and super confident that I would get here. They also made a lot of financial sacrifices and without them, I wouldn’t be where I am today. I never had a practical dream in my life. I wanted to be a pro baseball player before wanting to be an actor pro.

Where and when did the tour begin?

How do you feel about touring for this show?

I like it. I have always liked living it hotels, I feel it is exciting and in a way it kind of feels like a vacation. But then you show up to work and it’s a lot of hard work. So I would call it a nice mixture of work and play.

What attracted you to this show?

It was kind of crazy the number of people who told me I needed to audition for this musical. I was a sophomore at the University of the Arts and a friend told me about this, and as soon as it was possible for me to audition for it he and everyone else said I was going to play Spongebob. I thought my friends were crazy. A couple of years later the open call came out so, of course, I was going to give it a shot. I did the audition and eight or nine callbacks later here I am. 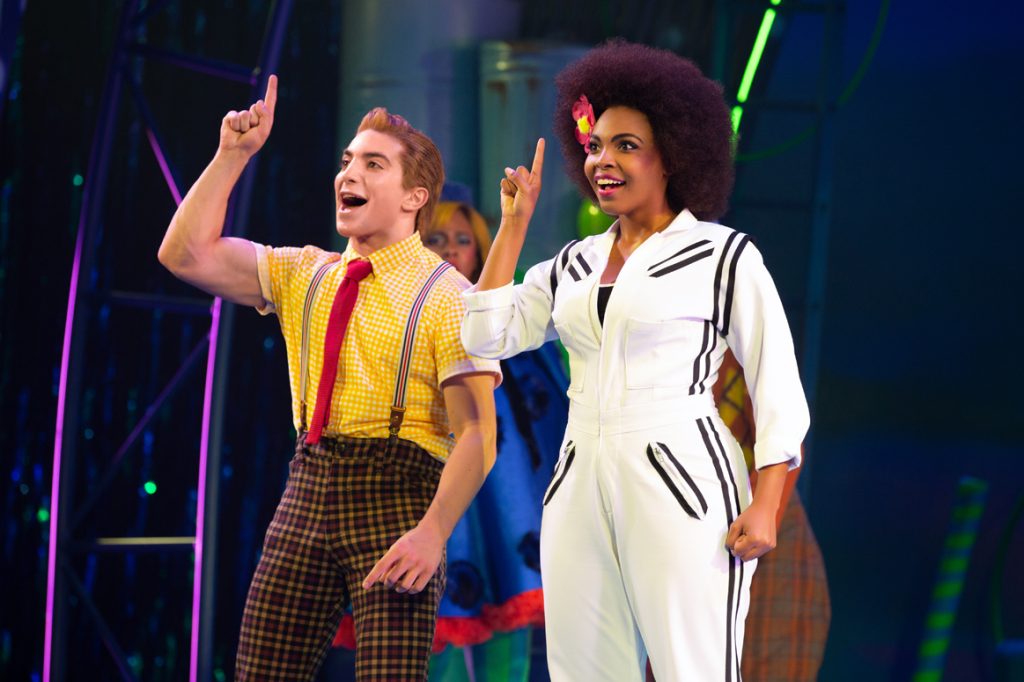 Why did they feel you were a good fit for this role?

I have the body type – a short and stocky body type — and I can be hyper. It is an extremely physical role and my athletic background is helpful. So things kind of lined up in a really good way. There aren’t many shows out there that so specially geared toward a short athletic man, so when people are looking for someone like that they are going to let me know. I didn’t understand it for a while, but I understand it now. It just feels right.

So, you just graduated from The University of the Arts this year?

How many friends and family members are coming from the Philadelphia area are coming to see the show?

Many of them. Of all the places we are going I am extremely excited about Philadelphia and Scranton. Philadelphia has a special place in my heart because it is where I found myself as an artist and where my relationship with my girlfriend, who is an exotic and aquatic veterinarian, blossomed. So, it feels like a second home.

How much do you enjoy the TV show Spongebob Squarepants?

Growing up I was a very big fan of the show. It is just a show that as a kid and a teenager, and even now, I would watch. It’s really a brilliant show. Something I always tell people who interview me is that I wake up in the morning open the shades and say “Good morning world, and all who inhabit it,” and now it’s my first line in the show.

Who should come to see the show?

This is a show that can be deceiving. You would think without knowing much about it that it is just for children or the family, but it is truly a show for everyone. If you don’t know Spongebob – the characters, story, and score make sense – but it also works regardless of your relationship to Spongebob.

Why do you encourage them to come?

I love the reaction we get to the show. This comes from super fans of the show who get all of the references. I also hear from adults and parents who were initially hesitant to come to the show but the took a chance and loved it. We hear from parents, “I expected to sleep through it while taking my kids, but now it’s one of my favorite shows.”

What do you hope for your future — Broadway, TV, movies or all of it?

Right now, of course, I’m focused on taking this one show at a time. For the future, I am trying to decide if I want to move to L.A. or New York. I am torn because both have opportunities, so it’s just a matter of where I want to make my home base.

There is also an online ticket lottery offering $25 tickets for upcoming performances on the day of the performance. For information go to forrestlottery.com. 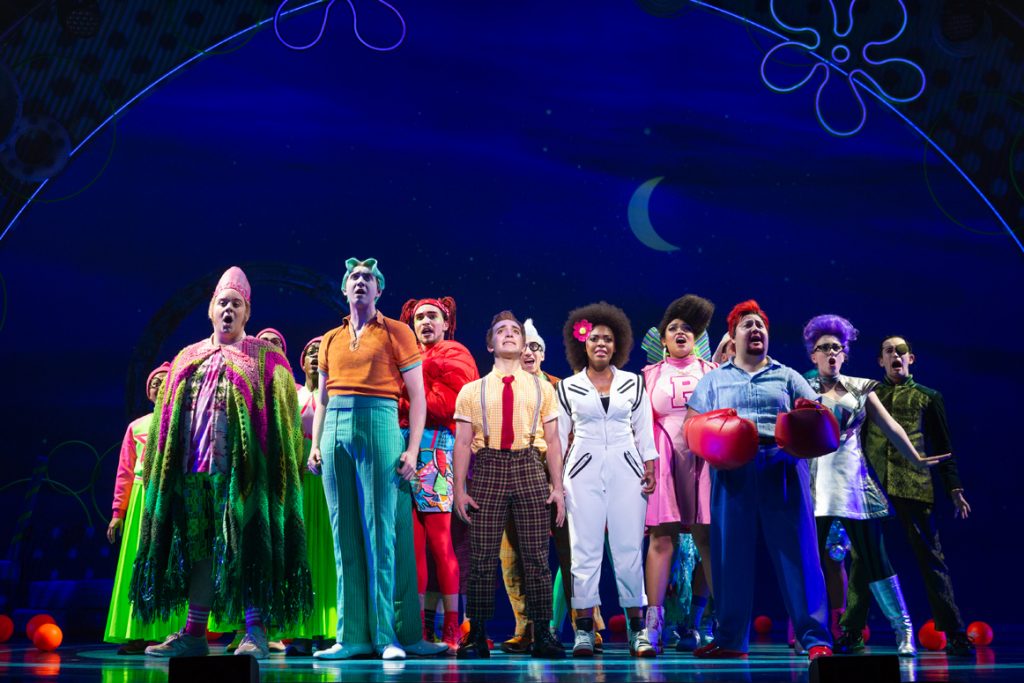 [The cast of The Spongebob Musical currently on tour in Philadelphia]