Funnyman Bob Saget, the multi-talented stand-up comedian, actor, television host, game show host, and director, has left an indelible mark on the entertainment world. His grieving friends and co-stars say Hollywood lost a legend. He was known for his big heart, big hugs, and his kindness and will be missed by family, friends, and fans.

Mr. Saget was in the middle of his I Don’t Do Negative Comedy Tour when he died Sunday (January 9) at the Ritz-Carlton hotel in Orlando, Grande Lakes, police have confirmed. The cause of death remains unknown, but detectives found no evidence of foul play nor any drug use. He was 65.

His last performance was on Saturday, January 8, at Ponte Vedra Concert Hall in Jacksonville, Florida.

The Philadelphia native, best known for portraying the beloved father Danny Tanner on the popular ABC sitcom Full House, (from 1987-1995), and the Netflix sequel Fuller House (2016-2020) that reunited him with co-stars, who became lifetime friends, including Candance Cameron Bure, John Stamos, and Jodie Sweetin.

Mr. Saget was also the host of America’s Funniest Home Videos (from 1989 to 1997), was still enjoying the world of entertainment that he loved up until the very end.

He was in the middle of a nationwide stand-up comedy tour that began in September 2021 and was set to run through June 2022. He was also known for his adult-oriented stand-up routine.

Mr. Saget also provided the voice of the future Ted Mosby on the CBS sitcom How I Met Your Mother from 2005 to 2014. He was nominated for a Grammy Award for Best Comedy Album in 2014 for That’s What I’m Talkin’ About.

From 2005 to 2010, Mr. Saget had a recurring role in four episodes of the HBO TV series Entourage playing himself. He would later appear in the 2015 feature film based on the series.

Originally intending on becoming a doctor, his honors English teacher saw his creative potential and urged him to seek a career in Hollywood.

After graduating from Temple University’s film school, he created Through Adam’s Eyes, a black-and-white film about a boy who received reconstructive facial surgery, and was honored with an award of merit in the Student Academy Awards.

Following a short stint as a member of CBS’ Morning Program in early 1987, Mr. Saget was cast as the widower and single father of three young girls, in Full House, which became a success with family viewers, and landed in the Nielsen TV ratings’  Top 30 beginning with season three.

Dozens of fellow comedians, co-stars, and close friends praise Mr. Saget not only for his wit, humor, and talent but also for his kindness. 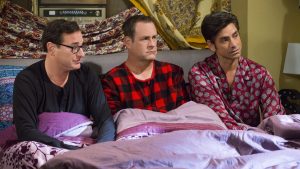 (L to R) Bob Saget, Dave Coulier, and John Stamos in a scene from Fuller House. Photo Courtesy of Netflix.

“I am broken. I am gutted. I am in complete and utter shock. I will never have another friend like him,” wrote John Stamos, who co-starred with Mr. Saget on Full House. “I love you so much, Bobby.”

Tom Bergeron, his friend, and co-star on America’s Funniest Videos Tweeted, “Just heard the news. Devastated. I am going to miss you, my friend.”

Andy Cohen Tweeted that Mr. Saget had “the biggest heart and wore it on his sleeve. He was so generous with his feelings. A mensch.”

“The loveliest man,” Dennings said. “I was his TV daughter for one season and he was always so kind and protective. So sorry for his family.”

Writer-producer Norman Lear called Bob Saget “as lovely a human as he was funny. And to my mind, he was hilarious. We were close friends and I could not have loved him more.”

Seinfeld and Broadway star Jason Alexander says “The loss of Bob Saget hits deep…He was kind and dear and cared about people deeply. He was the definition of a ‘good egg.’ Too soon he leaves.”

Candace Cameron Bure, a longtime friend, and co-star Tweeted “I don’t know what to say. I have no words. Bob was one of the best human beings I’ve ever known in my life. I loved him very much.”

In a statement on Sunday night, the Saget family said it was “devastated” to confirm his death. “He was everything to us and we want you to know how much he loved his fans, performing live, and bringing people from all walks of life together with laughter,” said the family statement.

“Though we ask for privacy at this time, ” the family continued, “we invite you to join us in remembering the love and laughter that Bob brought to the world.” 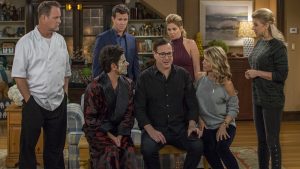 Bob Saget and the cast of Fuller House. Photo Courtesy of Netflix.