There are times in a young man’s life when he has to throw caution to the wind, take many deep breaths and put all of his energy into following his bliss – and that’s exactly what author and stand-up comic Allan Sidley did.

Several years ago, Sidley decided to step away from corporate life and took to the stage, which resulted in numerous gigs in major East Coast cities, favorable media attention, teaching comedy classes, and creating a podcast.

When the pandemic put the kibosh on most of this, the never daunted 31-year-old Sidley took the time to post some clever sketches.

Today, this expert punster is celebrating the launch of his first book – Daddy Issues: The Fatherless Comedian’s Original Jokes, available in paperback and on kindle.

While others may have been discouraged by all of the roadblocks to their big plans, the Northern Virginia native, who now makes his home in Baltimore, remained steadfast in his goals: to give people a reason to smile, and laugh out loud, during a global health pandemic. Basically, Sidley is irrepressible.

Daddy Issues is a collection of jokes he had written, told on stage, or are brand new and never shared before.

So, what are Sidley’s Daddy Issues? He didn’t have one most of his life to cheer him on at high school football games or come to school events. But he did have an extremely supportive single mother, who he was able to make laugh during the tough times. “I feel that my book is really a celebration of the family and friends I’ve had and lost throughout my life.”

The 178-page book comes out just the right time to help us find our funny bone, as we wrestle with the aftermath of a year in pandemic isolation. “I think my book is a distraction from everything in our lives,” Sidley says.

“It also points out a way to find humor in everything – not just the good or bad, but literally everything. It is also a self-help tool; we all need to laugh more,” he explains. “My aim was to bring laughter to those who need it most, and ultimately share my jokes with the world.”

Sidley shares with PCM why the world needs laughter right now, how he has dealt with losing loved ones in a positive way, his pride in writing his first book, and why he can’t wait to get back on stage once it is safe again. 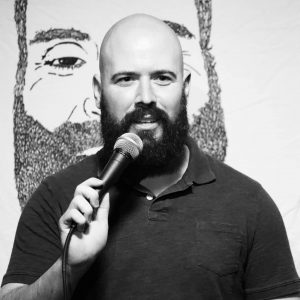 Allan, how did this rising star come to write his first joke book?

Allan Sidley: My girlfriend (now wife) Jill Bashore was picking up makeup and I stumbled into the Barnes & Noble humor section. I discovered that all the joke books were disappointing because they were filled with jokes everyone has heard since third grade and I knew my jokes were better, so why not write a book?

What was your initial goal for Daddy Issues?

Most comedians don’t have jokes that once stripped of their performance, still work. I wanted to write a book of jokes that would really cause people to react by loving or hating the joke. The worst thing you can do as a performer is to have people feel neutral about your work.

After the pandemic temporarily stopped your stand-up opportunities how did that affect you?

Some of my jokes are crafted to be exclusively enjoyed when read. After a couple of months of the pandemic, I found myself disengaging from social media, where I would traditionally post these kinds of jokes but I wanted to keep exercising my mind and my craft so this became a natural transition for me.

What is the overall goal and/or philosophy of the book?

There’s a lot of material in the book that’s personal, as well as impersonal, and sometimes a bit distasteful. I find things funniest when I play with both of those extremes. Jokes unfiltered. I really wanted to showcase my current catalog and not leave anything out. I joke about what I think is funny. My life experiences, family, and fantasies/ridiculous ideas that pop into my head.

Why do you love stand-up comedy?

I love the idea that I can come up with an idea that I think is funny and articulate it in a way that makes people laugh. It’s insane when you think about it…The only thing I love more than writing jokes is telling them. Connecting with an audience over jokes I’ve written is a beautiful thing.

How did you pick the title (theme) for the book?

Most of the jokes in the book (one-liners, puns, and wordplay) can be considered Dad Jokes and my Dad passed away when I was a baby, so yeah I’ve got Daddy Issues. 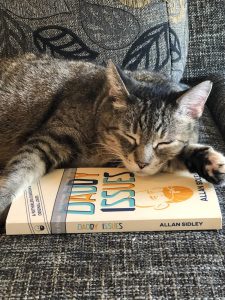 Selina The Cat, a big fan of “Daddy Issues”

What kind of father do you hope to be one day?

My adorable cat, Selina, would say I’m a supportive, loving father that doesn’t put up with her crap/bullshit.

What is the best part of married life?

There’s so much noise in the world and going on in my head. It’s great having a stable, loving home life. We have a great partnership and work through any relationship issues together. The food. We cook often and eat well!

What drives you to write a book, launch a podcast, and overall, work so hard?

I grew up feeling the drive and urge to succeed. Maybe it was to fill the void of never really having a Dad and I wanted to get noticed? I always tried my hardest in sports and school until I graduated from college and no longer saw the point. Comedy/Writing/Performing is something I am really good at and I see the point of why I’m doing it. I also believe by consistently working hard and strategically will lead me to produce high-quality products, grow my audience, and ultimately reach my goal of B-list comedian or comedy show writer.

What are you most looking forward to when you can stand-up in front of audiences again?

The whole raw experience. The pause before a punchline hits (or misses). Eruptions of laughter from the audience. Seeing people having a good time.

What is the best advice you ever received?

Just try it out.

What is your advice for aspiring comics? Authors?

Get on stage as soon as safely possible so you can see how different stand-up is than you thought it was. Don’t try jokes that only your friends would find funny. Don’t tell stories. Your friends like you. Audiences don’t know you. Just because it works for a zany/offensive character on TV doesn’t mean it will work on stage. They have context, other actors, a backdrop, all you have is a microphone.

What does it feel like to be launching your first book?

Excited, nervous, and exhausted. It’s been a bit of a roller coaster thus far so I’m trying not to overreact to each moment and enjoy the journey. 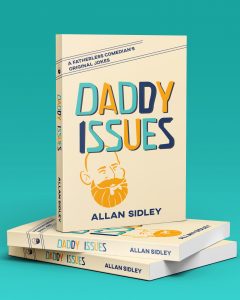 Why should everyone buy your book?

Laughing when you’re not supposed to

Distract you from the chaos that is going on in the world.

Hear/read jokes you haven’t seen before.

I LOVE TELLING JOKES SO MUCH!

Who are your favorite comics and why?

Anthony Jeselnik – He’s unapologetically offensive but gets away with it with incredible joke writing. (Now that I’m a comedian)

Dave Chappelle – He is one of the greatest. Loved watching his stand-up specials and the Chappelle’s show growing up. (My big influence growing up).

Kevin Hart – He built a following through hard work and perseverance. Still looks out for his people. So much energy on stage and film.

Mitch Hedburg – Nobody can do what he did in terms of writing and performing. Probably one of the most quotable comedians of our time. Gone too soon.

Richard Pryor – He didn’t hold anything back.

What is your April Fools Day message?

Be an optimist and celebrate your April 1st as “half fool,” a variation of this joke is in the book. Also, jokes are safer than pranks.