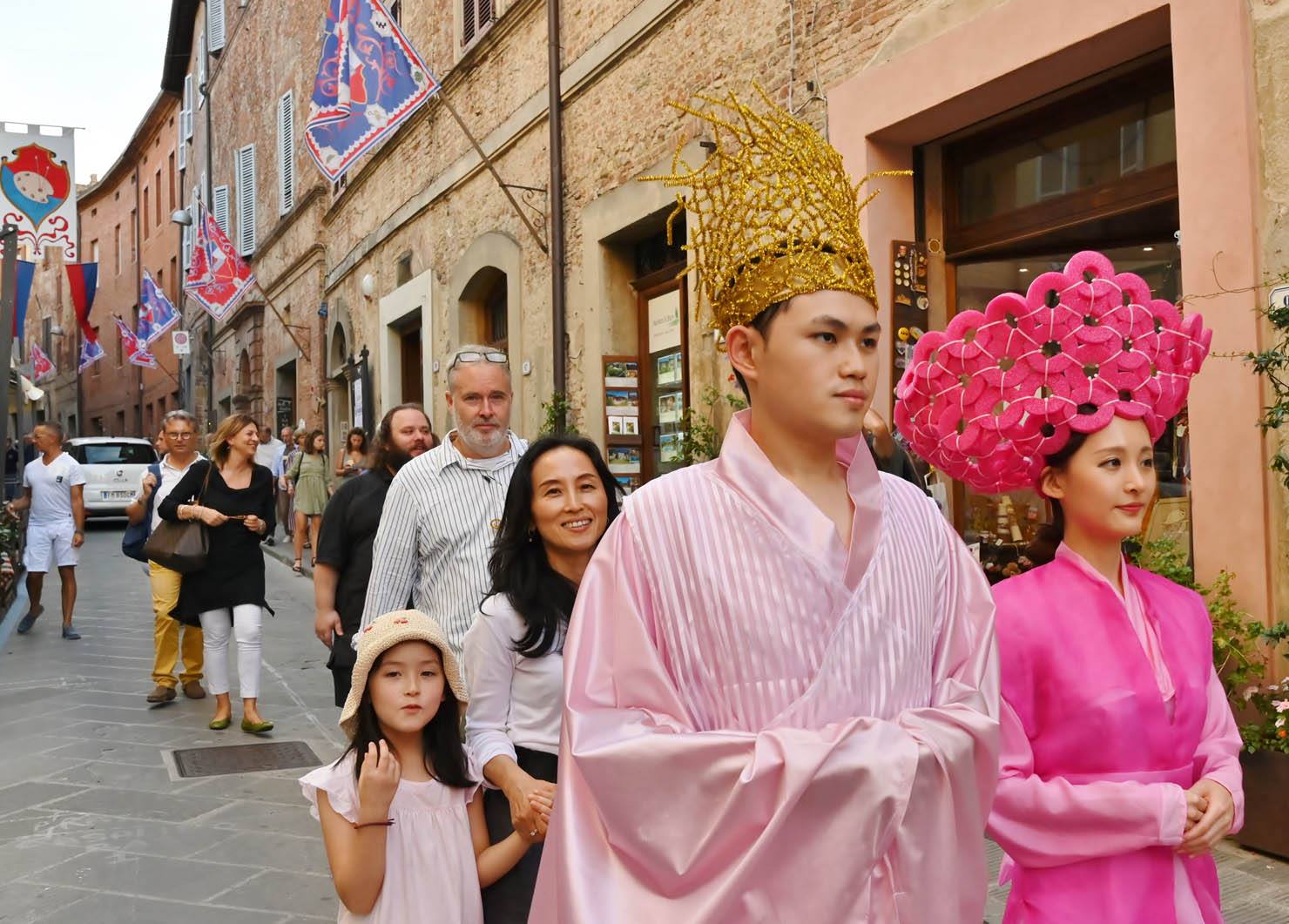 One day, some 16 years ago, opera director Karen Lauria Saillant was walking by the University of the Arts and was drawn in by the riveting display windows.
She walked inside and mentioned that she was looking for help with an upcoming opera she was working on to take from Philadelphia to Italy.
Soon after, in addition to meeting professor Mi-Kyoung Lee, the Head of the Fibers/Textile program at the University of the Arts in Philadelphia, she also found several interns interested in her work. This started a life-long friendship in which Lee has collaborated as a costume and set designer, and art director on many of Saillant’s International Opera Theater.
“As an international artist, Karen has been determined that every year she would have a premiere opera with global cooperation,” Lee said. “I kind of predicted that she couldn’t travel due to the pandemic, but I knew that wouldn’t completely stop her.”

This year in the fall of 2020, the picturesque town of Città della Pieve is returning all the affection and dedication received by Karen in all these years with a 20-day tribute: ′′Traveling Opera Images 2020, ” in which the stages will be retraced of the work done to date by International Opera Theater, through the shots of Ornella Tiberi, the cinematography of Diego Parbuono, and the designs of Francesca Tiriboco, a musical and photographic journey, from September 10 to September 30, along the streets and windows of the old town.
Compilation audios, with photographs from Karen’s operas, performed in Citta’ della Pieve over the past 16 years will be incorporated throughout the Italian town from Sept. 10 through Sept. 30 via opera worn clothing displayed in various store windows, photographs, from opera productions (with QR codes in the storefront windows) that can be viewed by the Italian city locals, as well as Philadelphians and those throughout the world, via YouTube.
“I knew this has been her baby for a long time,” Lee continued, “so it was wonderful to hear how the town was able to celebrate her legacy and dedication by having this special festival there.”
Lee fondly recalls that the community in Italy was so “warm and welcoming to my family. We would love to go back. It was such a special town,” she said. “All of the aspects of the traditional and non-traditional culture there were very interesting. In fact, my husband is practicing his Italian every day now so he is ready for our next trip there.”
Lee and Saillant discussed that instead of making the lotus flower that was the essential props for Opera Shim Chung, the children who participated in the opera would become the flower. “The children also portrayed symbols for the water, animals, clouds, and other expressions of nature — the prosperity of Korea,” Lee explains. “They became an integral part of the experience.” 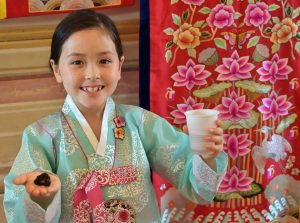 “My family was engaged in the whole production intensely – singing, movement, creation of costumes and sets and artistry,” Lee continues. “To be there in Italy with the children from here and opera singers from around the globe practicing and bonding over it, was truly wonderful. My children, who are bi-lingual, taught the other children performing in the opera about Korean music and traditions including origami workshop and tea ceremony.”
After performing in regional opera houses in Italy and the U.S., in 2003 Saillant founded International Opera Theater, a Philadelphia-based nonprofit, where she has continued to nurture her passion for art and life, and spread this cultural joy in the U.S. and abroad.
All of this is vital to Saillant. “When the artists performing are in harmony with nature, then the audience experiences catharsis and the expansion of their frame of reference,” she recently explained.

“I believe that the audience comes into the theater, and as a result of their interactions with these deeply harmonious artists, they have an experience that when they leave, has changed their world view,” Saillant continued.
“This opens audience members to new ways of thinking. The great powers of music, theater, art, and opera have the potential to truly expand our frame of reference,” Saillant said. “This is about an extraordinary expression of communication that goes beyond speaking.”
When Saillant and Lee first met in 2004 they began talking about Lee’s artwork and sharing ideas.
“We started talking a lot about collaboration, and it was a natural ebb and flow. Karen was extremely excited about the nontraditional approach of making costumes,” explains Lee.
Here is a link to a brief musical excerpt from one of Saillant and Lee’s magnificent operas: Buffalo Soldier

“At the time I knew very little about the opera world, and my practice was not very traditional back then – I was working with mundane materials to create my sculptures and textile work. Karen was fascinated by a lot of what I delivered to her – working with different materials such as kitchen towels, pipe cleaners, and other items which were different from the traditional approach to opera garments and costumes.”
This led to the start of many other lengthy conversations about the possibilities of the extraordinary collaborations. Their first opera in 2005, Il Racconto D’Inverno was based on Shakespeare’s “AWinter’s Tale.”
Lee’s affection for the arts and textiles began as a young girl watching and admiring her grandmother make her clothing, purses, and blankets. 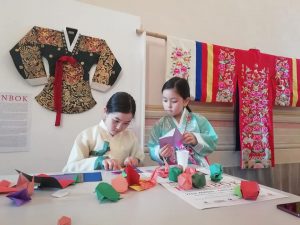 “It was natural for women of her generation to make all of this, and so I was always fascinated by costumes, fashion, and textiles and began studying fiber arts in my native South Korea,” she said. “This is where I started learning about tapestry, dyeing, papermaking, weaving, and all sorts of broad mediums. I have no regrets; it is a remarkable medium, and I am still discovering and still learning.”
Here is a link to another brief musical excerpt to Saillant and Lee’s opera:  Romeo e Giulietta
The magic that Lee weaves, using such ordinary objects such as plastic bags from supermarkets and department stores and tissue paper, is complemented by Saillant’s vision; together they have made stunning works of art.
One such outstanding collaboration was Opera Shim Chung, in which several of Lee’s students participated, including Vaira Zarli of Philadelphia. There were 25 cultures represented in Shim Chung Opera, as each opera singer and each instrumentalist came from a different culture. 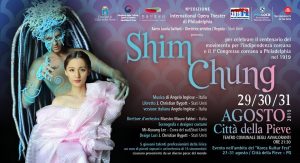 Zarli, a 21-year-old senior at the University of the Arts who loves studying fibers, textiles, and other mixed media, calls Lee “not only a great professor, but a great friend. Professor Lee is extremely resourceful and doesn’t talk or act like she is above you – she is one of the main reasons I joined the Fibers program.”
Lee asked Zarli if she was interested in working on Opera Shim Chung, because of her eye for fashion, and Lee was right. She definitely enjoyed it.
“It was the first Italian lyric opera set in Korea. We spent 3-4 months creating the background, costumes, and props,” Zarli recalled. “I improved my hand-sewing and enjoyed working with Karen when she came to the studio. It was a truly memorable experience.”
Lee says that working on Saillant’s operas was a gift for her students. “As a costume designer, it is important that you understand the relationship the visual garment has to the story, so that is the challenge for the artist, it is not only about your own artwork,” she said.
“This experience gave our students an opportunity to truly understand the art of collaboration, and how that costume he or she is making is affected by the way the opera singer moves, and sings, and interacts with the lights,” explains Lee.
“It also exposed them to not only Shakespeare and the other topics, but to a variety of cultures,” she says. “This really expanded our students and opened them up to different worlds to engage and prosper.” 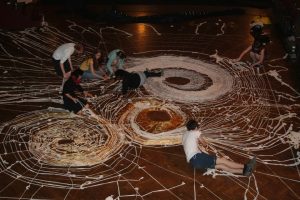 Dynamic Female Entrepreneurs Find the Silver Linings That Will Inspire All of Us!

Children’s Author Presents: “Ferdy The Fish: The Fish That Could Not Swim” — A Tale For Our Times!

Dynamic Female Entrepreneurs Find the Silver Linings That Will Inspire All of Us!

Sharon Lia’s Timeless Music Inspires Us To Remember: “Every Single One Of Us Matters!”

Stay-at-Home with Amazon Prime’s May 2020 Releases

Hulu’s May 2020 Releases to Watch During Quarantine