From the moment you meet Michael O’Neill you know two things for sure: you have seen him before in a number of television shows and movies, and you are certain that chatting with this devoted family man is going to make you feel both rich and inspired.

The native of Montgomery, Alabama, he lives with his wife and three daughters in Birmingham, and his new NBC prime-time drama, Council of Dads, is yet another jewel in his brilliant career.

The show is about the Perry family that grows in unexpected ways after a life-changing event, a cancer diagnosis received by the family patriarch, Scott Perry, played by Tom Everett Scott. He calls his three close friends (the council) to serve as back-up dads in the event of his death.

His wife, Robin, (Sarah Wayne Callies), is facing a great deal of personal drama as she tries to keep her family together. The show was inspired by the 2010 book of the same name written by Bruce Feiler.

Daughter, Luly, and her four siblings – Theo, Charlotte, JJ, and newborn Hope — adjust to the addition of three new “dads” who agree to help guide and support them and their mother, Robin, through all the challenges and triumphs life has to offer as a promise to their father.

Like most families, there are great emotions, heart, laughter, and tears to contend with in their story. The top-notch ensemble includes O’Neill as Larry Mills, Callies (The Walking Dead), and Michele Weaver, as Luly Perry.

O’Neill is known on television for portraying Special Agent Ron Butterfield, the head of President Jed Bartlet’s Secret Service on The West Wing, and CTU Administrative Director Richard Walsh in the first two episodes of the Fox drama, 24. In addition, he played a broken widower in the Season 6 two-part finale of Grey’s Anatomy,

Other memorable roles include Nick Ford on the second season of Bates Motel, and Alan Sparks on Extant. His most notable film performances include Seabiscuit, Secondhand Lions, Transformers, Traffic, Sea of Love, A Quiet Little Marriage, Nothing but the Truth, Green Zone, J. Edgar, and Dallas Buyers Club.

O’Neill says that as soon as he finished reading the script for Council of Dads he knew that he was right for the role of Larry. “It was incredibly honest and insightful. This particular character appealed to me so much; because there are clearly a lot of parallels for me in my own life,” O’Neill recently told PCM. “I am Southern. I’m the right age, and my life experience suits Larry’s life experience.”

Here is a look at O’Neill’s career and his focus on family, both on and off camera: 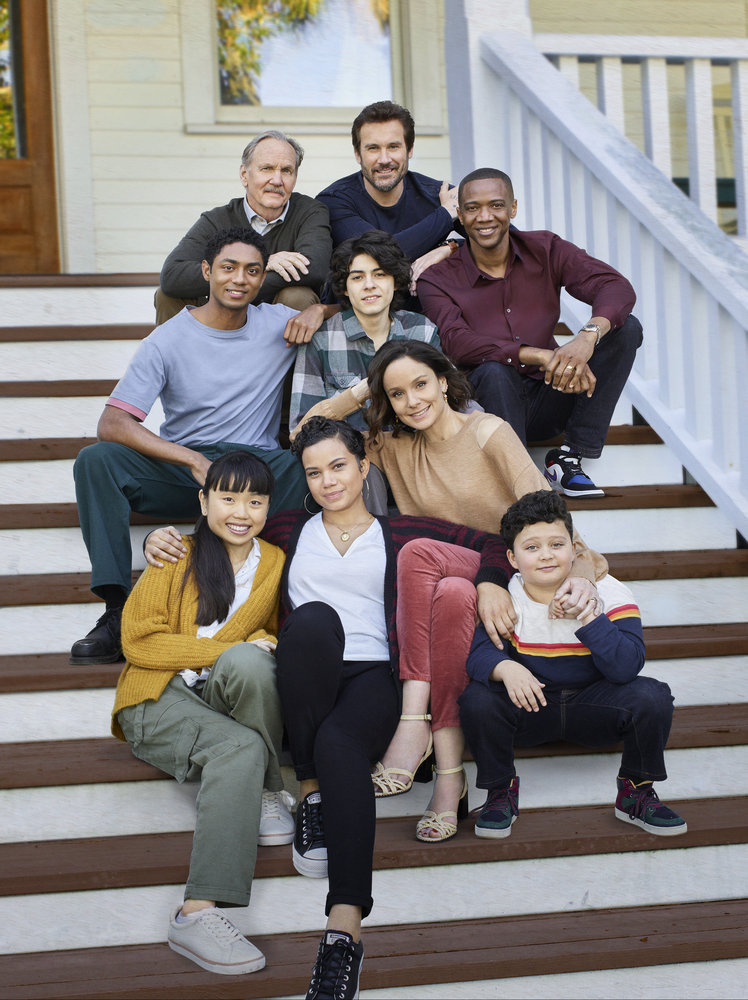 What else attracted you to Council of Dads?

Michael O’Neill: The thing that attracted me to it was when I was reading the script I found myself deeply moved by it but not manipulated by it.  So, when I went in to meet with the show-runner and the writers, I was just trying to show them what the character looked like. I knew who this character was. And they can go with somebody else if they wanted to, but they needed to know what it looked like. So, that was my intent when I went in. I was incredibly happy when they called me a couple of days later and said, ‘Let’s go to work.’

I am sure there were auditions that didn’t go the way you wanted, so what kept you going through the rough spots in your career?

My family. I have an obligation there. The kids are waiting at the front door, whether I got the job or I didn’t get the job. I’ve often said that for every public moment I’ve ever enjoyed, my family paid the private price for it because it’s not always easy to live with someone who’s often uncertain and preoccupied.

There was a thing that used to happen where I would be washing dishes at the kitchen sink and I’d go, ‘Oh!  That’s what that was all about…’ And my wife, (of nearly 40 years), Mary, would go, ‘Let that go, Michael. Just let it go.  It’s all okay.’ That helped ground me a lot.

Is there any other wisdom that you have to share about all of this?

I think when you’ve done this for a while, your history begins to say it’s going to be okay. You may not know where the next job is or who the next character is, or where the next fulfillment is, but history sort of indicates it’s out there, just be patient. Keep doing your work. Keep showing up. Try to be good enough that they must hire you…and then see what happens.

We cannot ignore the fact that the media landscape has changed so much. Now with all the streaming services and podcasts, just in the last five years or so, has that changed the way you approach your work or not?

I don’t know that it’s changed the way that I approach how I do my work.  It’s changed the business of my work tremendously. I don’t know how young actors navigate that. They’re more articulate about those kinds of things. We have seen a remarkable change in our industry. Hollywood owned Hollywood back in the day.

Right, we went from the major networks and Showtime and HBO to so many networks and streaming services there is a lot out there.

Yes, and they are really competitive. What it has done and the thing that I see a lot, and I’ve been very fortunate because I’ve worked some shows that had just extraordinary writers on them, but it’s drawn a lot of really wonderful writers to television. They like the long-form. I’ve done enough films to know that movie-making is about, you’ve got to cut this, you’ve got to cut that.

I like it, but you’ve got to go, ‘cut, cut, cut, cut.’ And the long-form allows these writers to explore a thing and put it in the library, and then re-explore it and then we’ll see it. But they’re incredibly articulate and talented. There’s some artistry happening on television right now.  I would argue, it’s a second golden age of television.

Why do you think our readers should come to the show and what do you think they’ll enjoy most about it, a few things?

There’s so much out there that divides us. There are so many platforms that sort of isolate us in our own thinking or plot-lines.  The thing that I find really compelling about this, is that in almost every turn, it pulls us together.

This family undergoes extraordinary adversity. It’s a loving, kind, funny, dear, eclectic, functional family. And Scott gets a very difficult life terminal diagnosis.  That wonderful family, there’s almost before diagnosis and after diagnosis. I think that there are a lot of families that go through that, whether it’d be the loss of a job or the loss of a parent, or some difficulty or the other that you have to reset the compass. So we have to ask — where’s true north?

And so, I think we’re recognizable, really recognizable, in that regard and that the issues that we’re dealing with, people can look at it and nod their heads yes.  And at the end of the day, I think our job is to let them know, you can get through this.  It may be painful, but you’re going to come out on the other side of it. That appeals to me a lot about that catharsis. And some hope and unity.

You’ve got to have hope.  That’s what family does for so many of us. 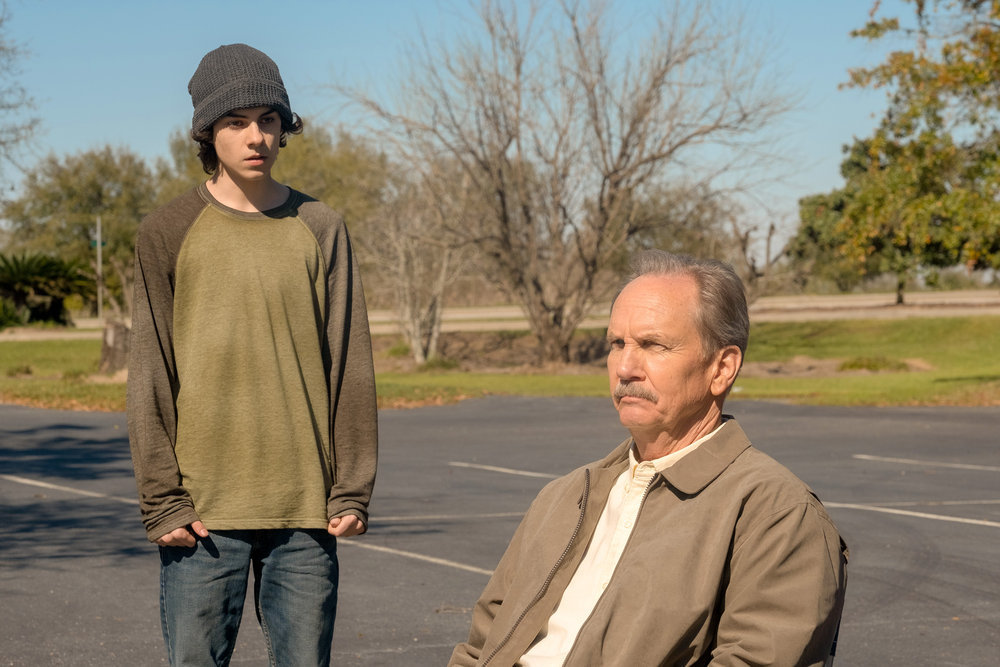 So I have to ask, what kind of dad are you?

I hope that I’m an improving dad.  It’s funny because my character lost a family to active alcoholism. When Scott calls to gather the Council, I’m the one that the family didn’t know. I had no relationship with them. I only had a relationship with Scott.  So I think that he was trying to give me an opportunity to be part of a family again.  In his mind, I was ready for it.  In my mind, I don’t know.

But there’s something that’s happened to me as a dad as a result of doing the role.  I think I’m better at it.  I’m better with my daughters. My family had a Christmas dinner and I said, ‘Guys, you know my failings. You know the times that I’ve been difficult or hard on you, or too demanding or too protective or whatever it was.  But I think when I see the way you operate in the world, I must have done a better job than I realized.’

I have identical twins, Annie and Molly, and an older daughter, Ella.  And my daughter Annie took one moment and says, ‘You, know Dad, I’m really glad you feel that way. I got a speeding ticket coming home from Savannah.’ [He laughed]. You couldn’t have written that tagline to that if you were in the writer’s room. I’ve learned a lot I’m learning art imitating life or art informing life.  So I think I’m a better dad now than I was in the beginning.  I’m learning that my job is to not mold who they are but to allow who they are, fertile ground to grow in.

What advice do you feel that you gave your daughters over the years, life lessons or things that you wanted them to really pick up?

I coached them in basketball when they were younger, YWCA leagues. And before they would take to court, I would always look them in the eye and say, ‘Go out there and make a mistake for me’ because I don’t want them to be afraid to make a mistake.  I think that’s important.  I think that we learn – listen, pasteurization was a happy accident. So I want them not to be cowed by that. My advice is basic but important, love one another. Don’t be afraid to lean on one another when they have to. Try to do some good.  Try to be of service in the world.

What charity projects are you involved in?

For years, I was involved with a children’s foundation in Rochester, Minnesota that I admired a lot. Shjon Podein is a wonderful hockey player. There’s a terrible disease called AT that these kids are born normal and at about five or six, they’re bumping into doorways and then the lining of the nerve deteriorates. They can beat you in chess but they can’t communicate anymore. They can’t focus their eyes. It’s what they call “an orphan disease” because it’s so small that there are no drug companies involved with it. So, I admired their work a lot.

In Birmingham, I’m involved with some recovery houses, halfway houses that I think are really important, particularly for moms because children are involved there.  I have been involved with Teach for America and Habitat for Humanity, as well. I try to stay active.

I wish you great luck with the show. It has been a pleasure catching up with you, Michael.

NBC’s new drama, Council of Dads debuted on Tuesday, March 24, at 10 p.m., EST immediately following the much-anticipated season finale of This Is Us.  Starting April 30, it will broadcast on its regular night on Thursday at 8 p.m. EST. 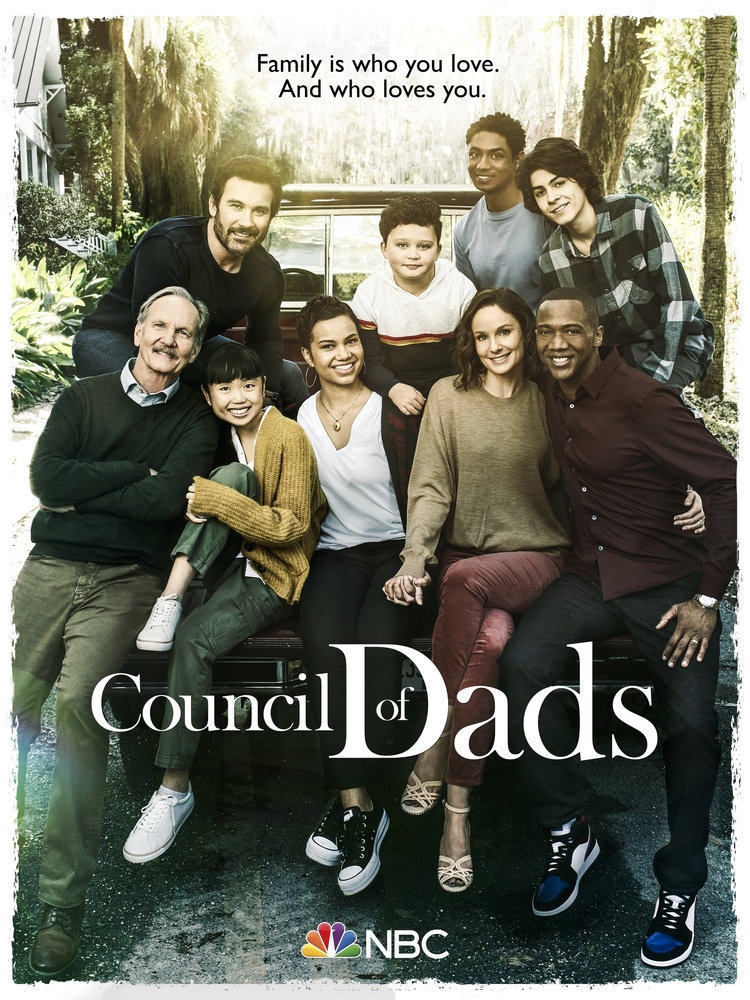