Dolly Gallagher Levi of Yonkers, New York, has a gift for matchmaking and Carolee Carmello, of New York City, has quite a gift for musical theater.

Stepping on the Academy of Music stage as the lovable-yet, meddling Dolly Levi is as thrilling for the actress, who has received much acclaim for her stage work, as it is for the audience and something you do not want to miss.

A true labor of love, Carmello has appeared in 14 Broadway musicals and is a three-time Tony Award-nominee for her performances in the musicals Parade, Lestat and Scandalous.

The four-time Tony Award-winning production of Hello Dolly!, including best musical revival, will allow us to take a golden trip down memory lane at the Kimmel Center’s Academy of Music from Wednesday, February 19 through Sunday, March 1.

Hello, Dolly! is a classic Broadway show brought back to Philadelphia audiences with the help of a fantastically-successful revival team and we are thrilled to be able to present this for two weeks,” said Ed Cambron, Executive Vice President & Chief Operating Officer.

“With a matchmaking leading lady named ‘Dolly Levi’ who, over the years has been portrayed by Broadway’s biggest names,” Cambron said, “this piece features elaborate costuming & comedic mastery.”

There is so much to love in this musical feast. The vibrant costumes, the innovative choreography, the melodic voices, and the time-honored songs, including, It Only Takes A Moment, Ribbons Down My Back, Before The Parade Passes By, and of course, the show-stopper, Hello Dolly!

In fact, there are so many extra touches that not only will you leave the theater humming and singing, but you will be ready to tell all your friends and maybe come back for a second show!

She has numerous off-Broadway credits, including Hello Again for which she won an Obie Award. Her television credits include The Marvelous Mrs. Maisel, The Good Fight, Madam Secretary, Smash, and Law & Order: SVU.

After breaking box office records week after week and receiving unanimous raves on Broadway, this production of Hello, Dolly! is touring around the United States, paying tribute to the original work of legendary director/choreographer Gower Champion.

A masterpiece of musical theater from Jerry Herman and Michael Stewart, Hello Dolly! is hailed both then and now as one of the greatest stagings of a show in musical theater history. 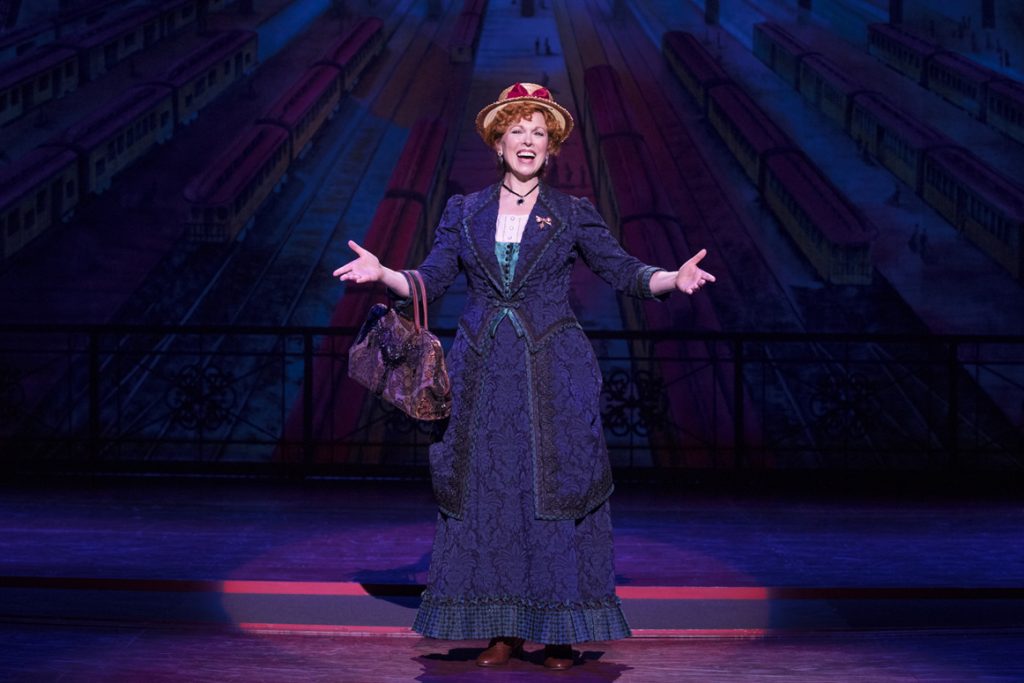 This is such a lovely and impressive show with the stunning costumes and stellar choreography, so I’d love to know what stands out the most to you?

It’s such a joyful evening in the theater. At this time in our country, a lot of people just want and need something smart and entertaining and it’s an opportunity to give people a few hours to laugh and not think about everything going on in the world. Since the show is so filled with joy it is a pleasure for people to come and take this lovely journey with us.

When and where did you join the current national tour?

I joined the tour in Kansas City this past fall along with 16 others in the cast. We have been to St. Louis, Oklahoma City, Hartford, Detroit, Austin, and Fort Worth, to name just a few locales. Betty Buckley started a year before that. Today, I am lucky enough to be in Naples, Florida, where it is a perfect temperature of 70 degrees.

What about Philadelphia excites you?

I was born in upstate New York, so I haven’t spent that much time in Philadelphia, but I love how entrenched in history Philadelphia is. The city has a special spirit, and the people are so passionate. I can’t wait to see the sites again. Since it is close to my current home of New York City, I know that my family and many friends will come and visit and I am looking forward to sharing this show with them.

Did you see Bette Midler in Hello Dolly on Broadway or other versions of the show?

No, I did not see Bette Midler nor Bernadette Peters in the role. I am all for watching everybody else’s interpretation. I watched Betty Buckley a few times. I have watched a lot of clips of the show online and it’s fun to see things that work and don’t work. All of it informs you and whatever comes out of me will be unique. If someone has figured out the exact right way to land a joke I don’t see why not to use it. So, it is helpful to have a starting place.

Do you have friends on the tour?

Yes, I do. A friend on the tour did Falsettos with me, is our wonderful conductor. It is a great company. I love all of them. People I work with are so smart, entertaining and fun to be around –they all have that special sparkle. One big example is John Bolton, who plays Horace; he and I have such a great time; he is wonderful in the role.

Life on the road is…

It’s fun and something I haven’t done in many years. I have two grown children and my last tour was 27 years ago before my daughter was born. It’s different now. There are a lot more apps and computers to get around. We feel more like a family unit when you are traveling together then when you do in New York because in the city most people go home after the show to their spouses and children. 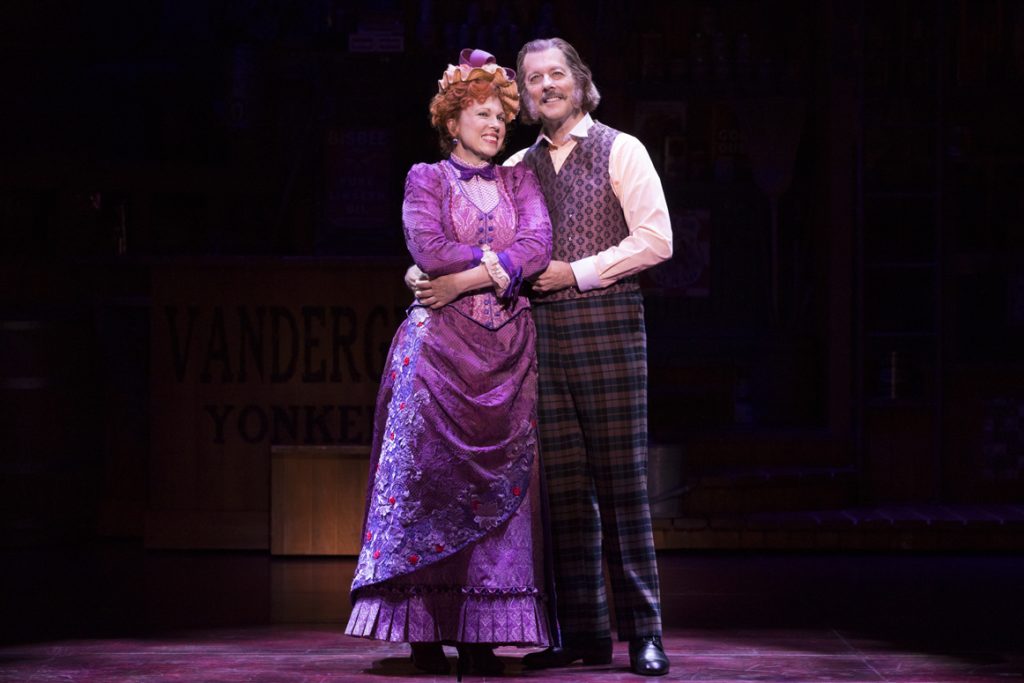 [Carolee Carmello as Dolly and John Bolton as Horace Vandergelder get cozy in Hello Dolly!]

Is your family coming to Philadelphia to see the show?

Yes, my son is in college in Pittsburgh and he is coming to see it and my daughter is driving down with her roommates. So I get to see my kids and they will get to get to see the show.

Do you think either of your children will follow in your footsteps?

Sort of. My daughter is out of college and working for a movie director and my son is studying film and media and is leaning toward the production end of the business, but neither is pursuing the acting path. Their dad is also an actor and they know it’s a hard life so I wouldn’t want to have the ups and downs. I’ve enjoyed my time for sure and I have been very lucky to work steadily. Who knows what would have happened if I went down a business path maybe I would have a corner office at a tech company

Who told you that you could be a Broadway actress?

I never planned on it. I was never a kid who dreamed of being on Broadway all my life. I went to college for business administration. Somewhere along the line during college, I did some shows for fun in my dorm and I was in a musical in the cafeteria. Then at the end of my senior year in college, I auditioned for a professional theater job in Lake George, New York. And the producer offered me a job but told me I would have to join the actor’s union, and that put me on my path. He also explained that joining the union would prevent me from doing community theater.

It made me turn a corner and put me in a circle of professional actors, musicians, and directors. It was my first producer and the first professional musical group of theater people. I moved to New York City and I am still based there nearly 40 years later.

What is it like to be nominated for a Tony Award?

I was thrilled every time it happened. But each time that I was nominated, the show I was nominated for had already closed so I never had that experience of the show that is still running. But it is still thrilling to be in that company, and hear your name called and walking the red carpet. It is nice to be acknowledged.

You spent a little time on one of my favorite shows, The Marvelous Mrs. Maisel. What was it like to be there?

I only worked on the show for one day, but it was exciting! I remember being blown away by the warehouse full of 1950’s clothes that they had assembled to use for costuming. And the sets were stunning and so beautifully built!

If you have never seen this show why is it a good time to see it?

It is such a beautiful revival. It is a classic show and extremely funny. People who have never seen the show are surprised how funny and relevant it is. It doesn’t feel creaky, old-fashioned or out of date. It is a really first-class production.

What if you saw it on Broadway recently or many years ago?

I think it’s fascinating to see a show with the same lines and songs and see how it looks and feels like a completely different animal. I hope that John and I as the leads bring a lot of warmth and chemistry. So, probably a lot of people who have seen it are ready to come back and enjoy the party again.

Would you like to perform on TV and movies?

As a musical theater person, it’s hard to break into that world. I had the good luck to do a show on AMC called Remember W.E.N.N. Written by Rupert Holmes who wrote the mystery of Edwin Drood, it was a period show and kind of a precursor to Mad Men. The longest time I spent doing a TV show. Perhaps when I am back from the tour I will pursue other opportunities.

Tickets can be purchased by calling (215) 893-1999, visiting www.kimmelcenter.org, or at the Kimmel Center Box Office.

Group sales are available for groups of 10 or more and can be purchased by calling (215) 790-5883. More information at www.kimmelcenter.org.