An endearing animated spy movie is the perfect Christmas treat.

Especially Spies in Disguise, a family-friendly comedy with a stellar cast led by Will Smith as super-spy Lance Sterling, a debonair operative who prefers to work alone.

Scientist Walter Beckett (Spider-man’s Tom Holland) is Walter’s exact opposite, a guy who lacks in social skills, but makes up for it in smarts and invention, creating many awesome gadgets that Lance uses on his epic missions.

But in Spies in Disguise, the charming animated holiday adventure from Blue Skies events take an unexpected turn, Walter and Lance suddenly have to team up for the ultimate mission that will require an almost impossible disguise – transforming Lance into a brave, fierce, and majestic… pigeon.

With the whole world in peril, Walter and Lance – clearly an odd couple — suddenly rely on each other in a whole new way. This spy comedy-adventure set is in the slick, high-octane, globe-trotting world of international espionage.

The directors were excited at the prospect of making what they believed could be a kid’s first introduction to spy movies. Therefore, it was important to them that Spies in Disguise had all the familiar elements of the genre: exotic international locales, dazzling cinematography, big action set pieces, futuristic gadgetry, and a great score with a memorable theme.

So they immersed themselves in the cool, stylized look and feel of them. They then imagined what would happen if they were to replace the heroes of those movies with a pigeon, and what they discovered was that the more grounded and cool the trappings were, the funnier it was with a pigeon in the center of it all.

During a recent visit to Philadelphia, the directors of the film, Troy Quane and Nick Bruno, were eager to talk about making their endearing new movie. 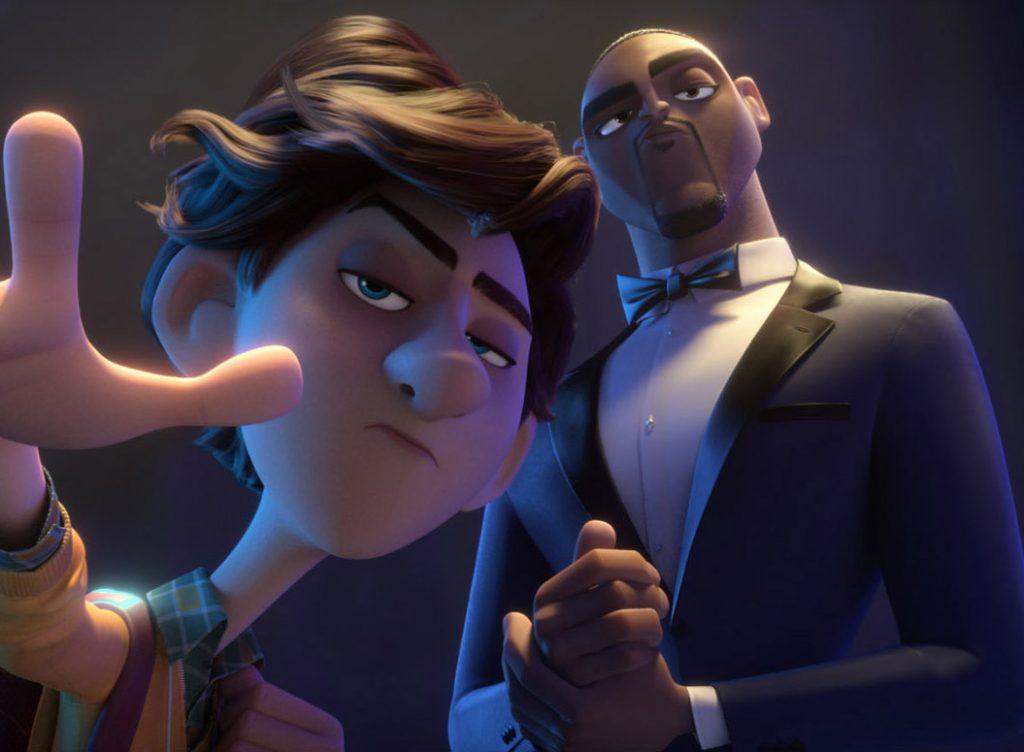 [Water and Lance in Spies in Disguise]

How much fun was making Spies in Disguise?

Nick Bruno: The most fun; we got to make our very own spy movie with great action where they were traveling the world. It has cool cinematography and great music and it is a buddy comedy – bringing together two unlikely characters.

Troy Quane: We also got to work with the most incredible cast during the four years it took to make the movie. We built an entire world, character by character, brick by brick. We had to know how to build everything; a true labor of love.

There are quite a few messages, what are some of the ones that resonate with you?

TQ: The one major message is that being weird is okay – we believe in Team Weird. That is an important message. Nick and I are parents and we always want to encourage our children to be their best selves. It is important to us that they can learn to have the courage to be themselves. We want them to know that usually, those people who step outside the norms are able to make the most miraculous things happen. So, weird is only weird until it isn’t anymore. Hopefully, kids can find their own way and see that Water is equally as awesome as Lance and in the end, Walter is rewarded.

NB: Another message is that this is a really big world but it’s also a connected world. We have to stop drawing lines in the sand because people are people. Walter is not as naïve as we initially are led to believe. He finds a good way to stop the bad in this world.  I also think you come to our party wanting to be Lance and leave wanting to be Walter.

Please talk about working with Will Smith.

NB: When we were creating the character of Lance Sterling we were looking at someone who could stand shoulder-to-shoulder with James Bond. The one name we both agreed on was Will Smith, who is cool, smart, and charming and he can play cocky very well. Looking at him in Men in Black, Independence Day and Fresh Prince, and so much more.

What did you discover when you started working with Will?

NB: From the first time we met him we saw that he is the nicest guy in the world. He loved the humor, messaging of our movie. He understood that this might be a kid’s movie but it also had to say something smart. We got lightning in a bottle with Will and this cast.

This was the first animated movie for Rachel Brosnahan, best known as Midge Maisel in The Marvelous Mrs. Maisel.

TQ: Yes, she had done a small voice-over but this was her first animated feature. We always record the voice to the specifics of the actor. We had such a fun time with Rachel; she is so funny, charming and sincere. We feel she brought to life an important character. She kick-starts the movie and its support structure we loved that she was a sincere, supportive mom as well as firm. She hit in on all levels.

What is a takeaway?

NB: We turn a spy into a pigeon but kids watching this must feel this is a believable world. We wanted to show a realistic mom having a conversation with her child about being weird. Someone who loved how special her son was and is her belief in and encouragement in him made all of the difference.

What was Will Smith’s reaction to seeing the movie?

TQ: Will loved it. It was important to him that this movie carries some good messages. He put so much time, effort and love into it. Every day he went into the studio and he would make us laugh and cry. It was amazing for all of us to sit in a theater with an actual audience and hear them laugh and gasp. The reactions we are hearing and seeing is extremely fulfilling and exciting.

What was your aim with this movie?

NB: We didn’t want to make this a spoof. We wanted to make this a legitimate spy movie that just happens to be animated. They’re in every city around the world. No one pays attention to them. Nobody even knows that they’re there. So they’re hiding in plain sight. Because they have eyes on the side of their head, they can see in 360 degrees, which means that at any given time, they can see your face and their butt. And you can’t sneak upon them.

TQ:  We both embraced the crazy idea – a man turns into a pigeon, which is insane. What was a genius about the conceit of the script, and therefore, made Walter’s idea so brilliant, is that pigeons are actually amazing creatures, and they are the perfect disguise! Because they will just fly away. They’re one of the fastest birds in the world. But because they’re so fast, they see at a faster rate of speed than we do, so everything to them feels slow motion. We would always refer to that as Pigeon Bullet Time.

How did your own children react to the final film?

NB: We took them to the recent premiere and instead of watching the screen I watched the faces of my children. It was exciting that we got to laugh as a family. Even the teenagers loved the comedy and the characters. Regardless, of how old you were there is a kid on the inside. It’s all about Team Weird, so it’s always weird until it isn’t anymore. Stay true to yourself and you will find your flock and find your success when everything is sorted out.

What is your plan for the future?

TQ: To keep making these movies. We have a bunch of things brewing that we are not quite ready to talk about.

What advice do you have for children or teens who want to follow in your footsteps in animation?

NB: Just start creating. There are a million different jobs out there and you will find your place. Look into drawing, lighting, animation, sound effects, etc. and once you figure out what excites you start looking at the names in the credits of your favorite animated movies and look into how they got there. Smartphones these days are a full production studio which makes it easy to be creative and have fun.

Spies in Disguise flies into theaters on Christmas Day 2019. 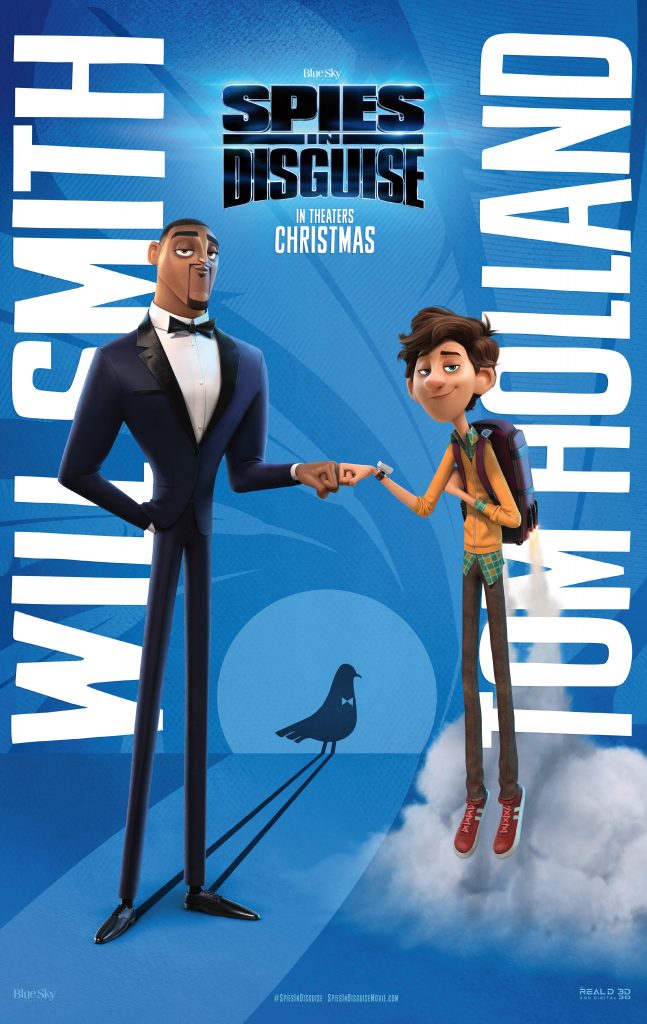